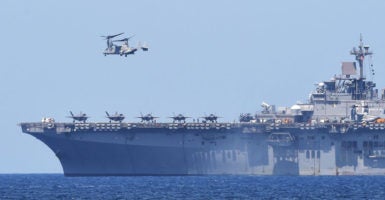 Congress could do more to shore up the U.S. military, but at least both houses now acknowledge the need to increase spending to some degree.

The final markup of the National Defense Authorization Act that the Senate passed on May 23 by a 25-2 margin shows progress toward rebuilding the military with considerable investments in the readiness and lethality of the armed forces and the creation of a space force.

Meanwhile, the House Armed Services Committee is debating a national defense budget of $733 billion and is scheduled to have a full committee markup on June 12.

This shows both houses recognize the defense budget must grow to meet the challenges outlined in the National Defense Strategy.

The bipartisan Commission on the National Defense Strategy recommended annual growth of 3%-5% above inflation to cope with today’s threats. This Senate bill reaches that goal, and the House bill falls short, but both are on the low end of the recommendation, which means gains in readiness and lethality will take longer to surface.

The Senate followed the president’s budget request and authorized the purchase of eight F-15EXs, even though, as John Venable, a senior research fellow at The Heritage Foundation, points out, the planes soon will be of use only in the continental United States because of the expanding footprint of modern-day surface-to-air missiles.

The Air Force needs to procure aircraft that will be able to survive not just today, but well into the future. The $948 million allocated to “new” fourth-generation fighters instead should go to fielding more F-35s.

The Senate bill does procure 16 F-35s more than what the administration requested, but this increase does not excuse the misguided decision of dedicating resources of the F-15EX.

The Heritage Foundation recommends the creation of an independent Space Force that includes all service and national security space assets and capabilities.

The Senate version of the defense spending legislation would establish a Space Force as an independent military service within the Air Force. This would allow the Space Force to adequately develop to meet the growing demands of space and cyberwarfare without getting bogged down in a lengthy bureaucratic process.

In the House, appropriators have requested further studies to refine the plans to establish a Space Force, but the Armed Services Committee has left the discussion to its full committee markup.

The Senate legislation would fully fund the administration’s plans to modernize our nuclear triad, including infrastructure updates, but on the House side, the subcommittee that deals with nuclear weapons is proposing a misguided prohibition on the development of low-yield nuclear warheads. This is a step in the wrong direction for our nuclear arsenal.

On another positive note, the Senate legislation carries a requirement that the USS Truman be refueled, a position recommended by The Heritage Foundation. The Navy initially requested the early retirement of the aircraft carrier. However, Vice President Mike Pence addressed the ship crew and stated the administration’s intention to now refuel the carrier.

All in all, the Senate defense legislation would provide crucial funding to alleviate some of the pains caused by sequestration. The bill would result in growth of military capabilities and personnel, and the topline of $750 billion is a great starting point.