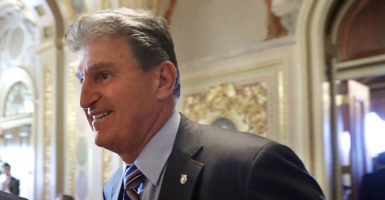 “After speaking with local education officials in West Virginia, I am not convinced that the Equality Act as written provides sufficient guidance to the local officials who will be responsible for implementing it,” Sen. Joe Manchin, D-W.Va., says. (Photo: Chip Somodevilla /Staff/Getty Images)

“I strongly support equality for all people and do not tolerate discrimination of any kind,” Manchin said in a formal statement. “No one should be afraid of losing their job or losing their housing because of their sexual orientation.”

The Equality Act, introduced March 13 and expected to be voted on this session, would add sexual orientation and gender identity to characteristics protected from discrimination under the 1964 Civil Rights Act.

“After speaking with local education officials in West Virginia,” Manchin said, “I am not convinced that the Equality Act as written provides sufficient guidance to the local officials who will be responsible for implementing it, particularly with respect to students transitioning between genders in public schools.”

The sexual orientation and gender identity legislation would make hospitals and doctors vulnerable to litigation “if they don’t follow the medical recommendations of the transgender movement,” as Emilie Kao, director of The Heritage Foundation’s DeVos Center for Religion & Civil Society, put it in a recent op-ed.

According to an explainer from Heritage, the legislation would force workers “to conform to new sexual norms or else lose their businesses and jobs” and medical professionals to facilitate procedures that violate their conscience rights.

If passed, the bill also would hurt women by “dismantling sex-specific facilities, sports, and other female-only spaces,” the think tank’s explainer said, and also compromise the work of charities and volunteers.

Manchin said he hasn’t given up on the legislation, but can’t support the current version.

“I will continue working with the sponsors of the bill to build broad bipartisan support and find a viable path forward for these critical protections so that I can vote in support of this bill,” Manchin said.

In a statement emailed to The Daily Signal, Kao said the legislation would be counterproductive to equal rights:

The Equality Act would enable the federal government to seize the authority of local communities and parents to decide what is best for their children. This bill would allow biological males to compete against girls in sports and would open up sex-specific facilities like locker rooms, bathrooms, and showers to members of the opposite sex.