How the Trump Administration Is Reining in the EPA’s Union 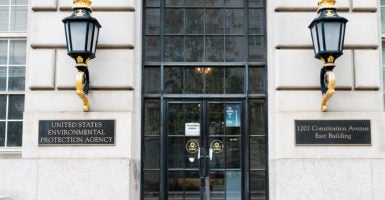 According to the president of the union—the American Federation of Government Employees—the EPA is “trampling on federal employees’ rights and ignoring the law” with the new agreement.

So what are the draconian provisions that have the union so exercised?

Well, perhaps the biggest change is that EPA employees will have an automatic right to work from home only one day a week instead of two. But the reason the union is up in arms has less to do with working conditions and more to do with losing its own taxpayer-financed perks.

Unlike private-sector unions, which have to charge their members (including some forced members) full price in order to finance themselves, federal employee unions are in large part financed by taxpayers who pay for all sorts of things, such as union office space within government buildings.

Tax dollars have even paid for federal workers to spend up to 100% of their time working for their union.

The new collective bargaining agreement brings an end to that. It cuts union office space in federal buildings and the use of conference rooms, internet, and other amenities, all of which the union used to receive totally free of charge.

The Trump administration is also taking on the EPA union’s most generous subsidy: taxpayer-funded manpower.

Under the old collective bargaining agreement, the EPA allowed employees to conduct union business during regular working hours while being compensated at their regular wage—a practice that is common throughout the federal government, called “official time.”

Indeed, many employees spend their entire workday doing union business and never doing what their actual job title suggests. These employees are, for all intents and purposes, full-time union reps being paid a government wage to not do their job.

Often, the employees that do this are among the most highly trained and highly paid. For instance, until recently, the Department of Veterans Affairs paid 400 physicians, dentists, nurses, and physician assistants to work for the union instead of helping veterans.

The new agreement between the EPA and the employee union does not completely do away with official time, but it does curtail it significantly.

Employees at the agency will now be required to do the job they were hired to perform 75% of the time they are on the clock. And, to prevent the union from simply spreading the same amount of official time across more employees, the new agreement caps the agency-wide total of official time as well.

The agreement also limits the sort of activities federal employees can do while on official time. Under the new agreement, employees will not be able to use official time to combat disciplinary actions taken by EPA management and supervisors unless they are defending themselves.

This does not mean the union can’t defend its members. It just means it has to spend its own membership dues, rather than taxpayer dollars, to perform these services.

Of course, the American Federation of Government Employees—the largest federal employee union, which donated $9.5 million to Democrats in the 2016 election cycle compared to only $100,000 for Republicans—would prefer to use its membership dues for other things.

The union complains that all of these provisions were unilaterally imposed by the administration. And to some extent, it’s right. It did not agree to these terms. But that’s because it walked away from the negotiating table years ago.

Federal law demands that both the agency and the union engage in collective bargaining in a good-faith effort to reach an agreement. In this case, the union did not even come close.

In fact, the union walked away from negotiations before they even began, refusing to negotiate unless the agency accepted a set of “ground rules” that protected every substantive provision of the old agreement. That was unrealistic and hardly in good faith.

This is becoming a familiar story by now. Federal employee unions are currently in the midst of legal battles over collective bargaining agreements at the Department of Health and Human Services, the Department of Veterans Affairs, and the Social Security Administration.

If they get in front of the right judge, they just might win. Even when the law isn’t on their side, they have a strong track record of winning in front of activist Obama-appointed judges.

But, in the long run, the union’s all-or-nothing tactics are doomed to fail. Public-sector unions in general, and the American Federation of Government Employees in particular, do their members no favors by refusing to engage in any serious conversation with agency leadership about the state of the civil service.

Good government groups on both sides of the political aisle are dialoguing about how to update a decades-old bureaucracy built for a bygone era. Not since the 1970s has there been more bipartisan agreement that serious reform is needed.

Labor unions are not part of this exchange, however, because they prefer to throw bombs and cold water than offer any practical solutions. The reform agenda that is currently galvanizing in their absence will soon blindside them.

The climate has changed, and the EPA fight is just the beginning.