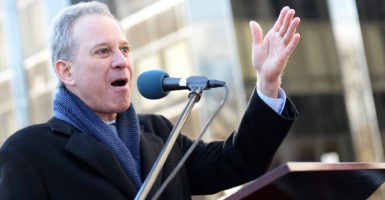 A coalition of northeastern states suing the Trump administration over the new tax code is only the most recent example of what puts Democrats on track to file a record number of lawsuits against one administration.

Democrats already have set a record for most lawsuits filed against a presidential administration in a single year.

The governors of New York, Connecticut, and New Jersey, all Democrats, announced the tax lawsuit Friday. The attorneys general of the three states, also Democrats, will carry out the litigation.

Already, Democratic attorneys general across the country have initiated court challenges to the Trump administration over travel restrictions on some countries, the issue of net neutrality, and environmental policies.

Two of the three states, New York and Connecticut, also sued over new Environmental Protection Agency rules they contend fail to protect their land from pollution.

For most of the past year, the Democratic Attorneys General Association has declared on the front of its website: “Democratic attorneys general are the first line of defense against the new administration.”

A total of 22 state attorneys general across the country are Democrats, plus the attorney general of the District of Columbia. They initiated 35 multistate lawsuits against Trump administration policies in 2017 alone.

That contrasts with 46 multistate lawsuits brought by Republican state attorneys general against the Obama administration during all eight years, according to research compiled by Paul Nolette, a political science professor at Marquette University in Milwaukee, Wisconsin.

“Attorneys general have always been political animals, since most are elected,” Nolette told The Daily Signal in a phone interview. “What has really changed is the perfection of multistate lawsuits [against the incumbent administration] to shape policy.”

During President Barack Obama’s two terms, Republican state attorneys general led litigation challenging the constitutionality of Obamacare and the legality of Obama’s executive actions to advance immigration and environmental goals, among other issues.

“There’s no doubt this could be seen as taking a page out of the Republican AGs’ playbook,” Lizzie Ulmer, communications director for the Democratic Attorneys General Association, told The Daily Signal in a phone interview. “So the number of legal actions were needed along with the number of times the Trump administration violated the law.”

Texas Attorney General Ken Paxton, a Republican who led some of the lawsuits against the Obama administration, strongly disagrees.

“We challenged the Obama administration on its authority to rewrite the law that Congress hasn’t written,” Paxton said. “This, on the other hand, is suing the Trump administration because they don’t like his actions, and their goal is to get a liberal judge. The travel ban, for instance, was based on a specific statute.”

For its part, the White House was dismissive of the most recent litigation over the tax reform package passed by Congress and signed into law by Trump.

“This is a ridiculous, meritless publicity stunt by governors trying to blame the president for their high taxes and anti-growth policies,” White House spokesman Raj Shah said in a written statement.

Referring to the new tax law by its formal name, Shah added:

They should look to the Tax Cuts and Jobs Act, which at last count has led to more than 3 million workers … receiving bonuses, raises, additional benefits, or new jobs, as a model for how they can make their own states more affordable. Instead, they’re wasting taxpayer money on frivolous litigation.

In a year-end report, the Democratic Attorneys General Association details what it calls its “legal challenges to attacks on Muslims, trans troops, DACA recipients, women’s health, students, the environment, workers, and consumers.”

Earlier this year, after 10 Republican state attorneys general threatened to sue the federal government over the Obama administration’s Deferred Action for Childhood Arrivals program, all 20 Democratic attorneys general wrote Trump pledging to defend him against his own party if he preserved DACA.

After the Trump administration announced a phase-out of DACA, 16 Democratic attorneys general sued.

“Federalism is a key constitutional value and if a state feels trampled on, the courts are a reasonable place to turn,” Nolette, the Marquette University professor, said. “Increasingly, both Republicans and Democrats use courts not as a federalism device but to advance the agenda of their political party. It’s fairweather federalism. Democrats care if it’s a liberal issue, Republicans care if it’s a conservative issue.”

Under federalism, states have the power to determine many of their own policies while remaining part of, and under the authority of, the larger political unit of the United States government.

During the two terms of the Reagan administration, 39 multistate lawsuits were filed, with a single year peak of seven lawsuits in 1982, according to Nolette’s tracking.

Under the elder Bush, the number of multistate lawsuits peaked at three in 1991, with a total of eight for the four-year term. President Bill Clinton faced 18 multistate lawsuits during his two terms in office, with a single-year peak of five in 1997.

Under the two terms of the younger Bush, the number of multiyear suits leaped to 44, with a single year peak of 10 in 2003.

Obama saw 46 multistate lawsuits over his eight years, peaking at 13 in 2015.

State attorneys general should be a check on federal power regardless of who the president is, said Nicole Waugh, spokeswoman for Arkansas Attorney General Leslie Rutledge, chairwoman of the Republican Attorneys General Association.

“Attorney General Rutledge is committed to fighting against an overreaching federal government regardless of who serves as President,” Wough told The Daily Signal in a statement. “The Obama administration took many actions that exceeded the authority of the federal executive branch and infringed on the rights of states. It is incumbent on attorneys general to uphold and defend the rule of law.”

This story was updated to reflect there are 22 Democratic state attorneys general.