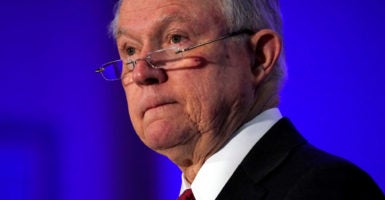 Warrants to spy on citizens must be based on facts, insists Attorney General Jeff Sessions, here speaking Feb. 12 about the opioid drug crisis and violent crime to the National Sheriffs' Association in Washington. (Photo: Yuri Gripas/Reuters /Newscom)

Attorney General Jeff Sessions said the Justice Department is investigating the accuracy of information the FBI submitted before the 2016 election about a “dossier” damaging to Donald Trump to obtain a warrant to surveil a campaign adviser.

“That will be investigated and looked at,” Sessions said in an interview Sunday.

Maria Bartiromo, host of Fox’s “Sunday Morning Futures,” had asked Sessions: “Are you, sir, investigating the fact that the FBI used the dossier to get a wiretap against Trump associates and they did not tell the FISA court that the Democrats and [the] Hillary Clinton [campaign] paid for the dossier?”

“Let me tell you, every FISA warrant based on facts submitted to that court [has] to be accurate,” Sessions replied.

“That will be investigated and looked at, and we are not going to participate as a Department of Justice in providing anything less than a proper disclosure to the court before they issue a FISA warrant. Other than that, I’m not going to talk about the details of it, but I tell you, we’re not going to let that happen.”

Sessions did not provide additional details about the investigation, which has been urged by Republican lawmakers.

In October 2016, not long before the election, the FBI and Justice Department submitted an application to the Foreign Intelligence Surveillance Court to obtain a spy warrant against Carter Page, a business consultant and campaign volunteer who had left the Trump team a month earlier.

The partisan dossier compiled by former British spy Christopher Steele is said to have been a significant part of the application to the court, even though the salacious document about Trump’s connections to Russia was and is largely unverified.

Republicans also alleged that Steele, the opponent of Trump who authored the dossier, misled the FBI by failing to reveal that he met with reporters in September 2016 to discuss his investigation of Trump.

One of those reporters, Michael Isikoff of Yahoo! News, wrote a story based on Steele’s information.

That Sept. 23, 2016, article, which included Steele’s allegations about Page, also was used by the FBI and Justice Department to help justify the surveillance warrant. The application did not note that the Isikoff article came from the same source as the dossier.

Obama probably didn’t do enough to raise a red flag after he found out Russia interfered in the election, Sanders said on NBC’s “Meet the Press” before pivoting to criticize Trump for downplaying Russia’s role.

“Obama was in a very difficult position and didn’t want to make it appear he was favoring Hillary Clinton,” Sanders, who challenged Clinton for the Democratic nomination, said. “Maybe he should have done more.”

An indictment announced Friday alleged that 13 Russian nationals tried to help both Sanders and Trump during their respective presidential candidacies.

Special counsel Robert Mueller secured the indictment from a grand jury against the Russians, affiliated with three Russian companies suspected of interfering in the election. The goal was to create chaos inside the U.S. political process, according to the indictment.

The indicted Russians operated both pro- and anti-Trump social media accounts. The accounts also were used to provide support for Sanders, at the time considered a formidable opponent to Clinton, and to Green Party candidate Jill Stein.

“We have got to do everything we can to make sure that they do not undermine American democracy,” he said.