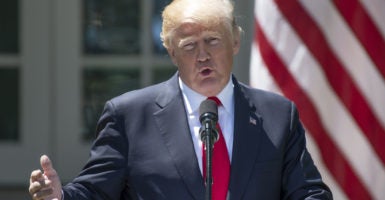 “We, the undersigned members of the United States Congress, respectfully nominate President Donald J. Trump to receive the 2019 Nobel Peace Prize in recognition of his work to end the Korean War, denuclearize the Korean peninsula, and bring peace to the region,” the congressmen wrote the Norwegian Nobel Committee.

Today, 17 of my House colleagues joined me in nominating @realDonaldTrump for the 2019 Nobel Peace Prize. pic.twitter.com/TJpJKW9JGH

GOP Rep. Luke Messer of Indiana was the congressman who sent the letter to the committee. The Indiana congressman was able to get 17 of his Republican colleagues to join in and support his nomination.

The GOP representatives who signed Messer’s letter include:

“His administration successfully united the international community, including China, to impose one of the most successful international sanctions regimes in history,” the congressmen wrote. “The sanctions have decimated the North Korean economy and have been largely credited for bringing North Korea to the negotiating table.”

“Although North Korea has evaded demands from the international community to cease its aggression for decades, President Trump’s peace through strength policies are working and bringing peace to the Korean peninsula,” the congressmen wrote. “We can think of no one more deserving of the Committee’s recognition in 2019 than President Trump for his tireless work to bring peace to our world.”

Former President Barack Obama won a Nobel prize in 2009 for his “extraordinary efforts to strengthen international diplomacy and cooperation between peoples.”