Most G-20 Countries Aren’t Economically Free. The US Can Help Change That. 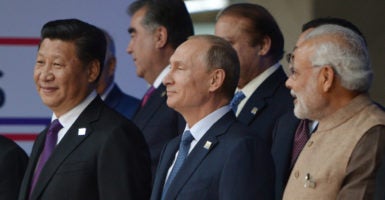 Although much of the focus at this weekend’s G-20 summit in Osaka, Japan, will be on the U.S-China impasse on trade and other issues, more attention should be paid to the sorry record that most G-20 countries have when it comes to economic freedom.

Each year, The Heritage Foundation ranks countries according to their levels of economic freedom, a score composed of multiple factors like the rule of law, tax rates, and more.

According to this year’s report, 12 of the G-20 nations (not counting the European Union) rank as either “moderately free” or “mostly unfree.” That should be unacceptable for a group that styles itself as the world’s “premier forum for international economic cooperation.”

While the G-20 organizers stress the importance of improving global governance, it’s clear that the U.S. and the handful of other economically free G-20 countries don’t have much to learn from autocracies like China, Russia, Saudi Arabia, and Turkey.

Nonetheless, international bureaucrats have morphed the G-20 into a global version of the administrative state swamp that President Donald Trump has been trying to drain in Washington.

They have plenty of ideas on how to spend your tax dollars on the usual list of suspects: climate change, gender issues, and government-centric economic development programs that are more than likely to fail.

Still, there are some positive opportunities. This year, the Japanese hosts will be promoting a useful agreement to strengthen the protection of international data flows to advance digital commerce.

Other areas where the G-20 can make a positive difference include better global coordination among financial markets, finding creative ways to cut taxes and public spending, and reducing barriers to trade.

Trump, as the leader of the free countries within the G-20, should take the lead to urge other, more restricted G-20 countries to adopt policies that will encourage greater economic freedom.

They could start by mimicking his successful tax cuts and regulatory reforms, which have spurred economic growth in the United States since he took office.

With strong U.S. leadership, the economically free countries of the G-20 can begin helping the less-free countries raise their economic freedom scores and open new pathways toward greater global prosperity.