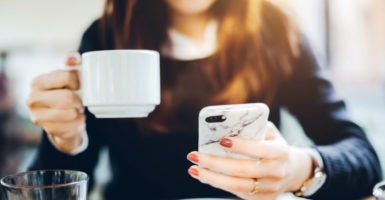 AllSocial is a new social media platform designed for everyone, with minimal censorship. (Photo: d3sign/Getty Images)

Facebook has become so big that even one of its initial founders says it’s time for government to break it up. But what if the market solved the problem — and offered users better free speech protection? Enter AllSocial — a new social media platform designed for everyone, with minimal censorship. Read the interview, posted below, or listen to the interview with Rolfe Carawan, who is a part-time consultant for AllSocial, on the podcast:

Daniel Davis: I’m joined now by Rolfe Carawan for AllSocial, which is the newest social media company in America, launched in April of this year. Rolfe, thanks for joining me on the podcast.

Rolfe Carawan: Ah, thrilled to be here Daniel. Thank you for having me.

Davis: So, AllSocial, this is a new social media platform-

Davis: [AllSocial] has some similarities to Facebook and Twitter, but some key differences. Before we get into those, tell me what was the main motivation for starting this new social media platform.

Carawan: The whole antecedent and the vision was to create a social media company that would really be able to reach all of America.

Davis: Yeah, and of course a lot of folks, a lot of conservatives have had their content taken down. I can’t count the number of times I’ve seen the screenshot somebody posts [of the]”Community Standards Violation” at Facebook, and then once they go public about it, they get a little email that says, “Oops, that was an accident, sorry, you’re back on.”

So, none of that with AllSocial. Do you have any standards that censor anything beyond obviously inappropriate material?

Carawan: Absolutely. What we’re doing is basically trying to create a platform that would be between PG-13 and little PG-13+, if some people have salty language. We don’t want to be the speech police, if you will. We don’t want to have to sit there and nickel and dime it and everything.

But here’s the thing, there will absolutely no pornography, no incitement of violence, or direct threat to somebody. And any kind of thing that you would see that was recruiting people for, say, jihad and maybe showing some of the graphic videos and things along those lines.

And then the best protection we have is our audience themselves and our members themselves. The AllSocial people who have created and see it and then they can report it and block it immediately. So…

Carawan: Nothing’s going to be perfect.

Carawan: And you’re not going to satisfy everyone, but we really are trying to make this a winsome place where people can share their thoughts and their ideas and really express their conscience without fear of being banned.

Davis: Yes. Well, one of the things that Facebook is taking so much flack for is selling people’s data. That really is built into their revenue model. They make money from that. How is AllSocial different? What is its revenue model?

Carawan: Well, thank you for asking. First of all, we want to protect people’s privacy, so there will be no selling of anyone’s data. And so we’re going to do everything we can to protect that.

And the revenue model that we’re coming up with is very simple. It’s about every sixth or seventh post in someone’s stream would be an advertisement. They can just pass on by or maybe take a look at it and so we will be funding this thing through advertisements that will generate enough revenue to keep us going and growing.

Davis: And I also understand that folks won’t have to boost their content.

Carawan: Exactly. See, we feel like that AllSocial is close to the way that social media should be and should have been. With some other social media platforms right now, we saw them becoming increasingly hostile to people’s messages, which you have mentioned.

We also saw that the organic reach, or the free reach that people were getting by sharing their material, was decreasing. Four or five years ago, you would have 20 to 25% of what you shared be seen by your people. So if you posted enough, the majority of people would see it, at least that’s what logic says.

But the algorithms now have been tightened down so much that these social media platforms have become pretty much a pay-to-play system. We decided that’s not right.

What we are going to do is basically, you’ll build your audience and we will share 100% of every post that you put out there, in sequence, and in a timely manner. We’ve had complaints with people before that missed announcements or missed writings because the algorithm kicked it back and it didn’t show up for days, right?

Carawan: So you’re going to see a much different product and a different experience with us than maybe some of these other programs.

Davis: Well, you mentioned that you’ve already got …. people using the platform, but you only launched in April.

Carawan: The whole idea is to get the word out to friends and people who are open and who are just looking for an alternative who would share with their family and friends.

Daniel: Great, well, tell me a little bit more about the user experience because I know there’s some similarities to Facebook and to Twitter, but as you’re on the platform, what’s it like? What are the key features of it?

Carawan: One of the things we’ve tried to do is make it real simple. And so you go up and you can create your profile and you can also, when you log on, you’ll create areas, just three areas that you may be interested in. And then that will help inform us about what you might want to see or make some suggestions for you.

When you first log on, you just hit the “plus” button and you make a little post. It could be something that you’re reposting from another platform or originating there.

Carawan: Yes, sync it all up. We’re just going to make it when you see the feed, it’s real clean and it’s real nice, and you just make your comments or your likes.

Davis: Well, if folks are interested in signing up, how would they do that?

Carawan: Very simple. “AllSocial” is one word and you can go to AllSocial.com if you’re online and sign up. Put in your username, your password, your email address. They’ll send you an email–let’s you go ahead and verify that you are a real person and not some robot–and they’ll send it back to you. Open it up and put in your email address, and password, and start posting.

The other part of it is with your phone. Go to your app store, and [type] one word, “AllSocial”–if you divide [the word] it up you are going see some crazy stuff with all social–and it will come up to the beautiful icon that has two pillars with multiple colors on it. It’s very beautiful.

The other part of it is, not only are you just posting like you would and sharing your pictures or your stories or whatever you want to share, inviting your friends is super easy.

If you go into your profile and you hit the little icon that shows your face, it’ll pull down “Go Profile” and “Go Invite Friends,” and you can just go in there and if you give access to your friends, then you just click them off, and you create a little email and hit it and it’ll invite them and say, “Come join me on AllSocial.”

So we’ve tried to make it easy for everybody to be a part.

Davis: Well, it’s such an exciting project and [we] look forward to seeing where it goes in the months ahead. Rolf, really appreciate your time and thanks for sharing about it.

Carawan: Thank you, Daniel. I really appreciate it.

This transcript has been edited and information has been removed after initial publication.