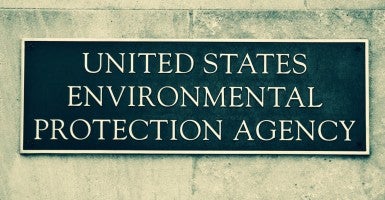 The Environmental Protection Agency (EPA) broke the law when pushing its controversial water rule, according to the Government Accountability Office (GAO).

As Congress considers whether to include a provision in the omnibus appropriations bill to block funding for the water rule, this should make the issue a no-brainer. As if a rule that attempts to regulate almost every type of water wasn’t enough of a reason.

The following comes from the conclusion in GAO’s ruling, which discusses some of the problematic actions previously highlighted by Heritage:

The use of appropriated funds associated with implementing EPA’s Thunderclap campaign and establishing hyperlinks to the NRDC and to the Surfrider Foundation webpages violated prohibitions against publicity or propaganda and grassroots lobbying contained in appropriations acts for FYs 2014 and 2015. Because EPA obligated and expended appropriated funds in violation of specific prohibitions, we also conclude that EPA violated the Antideficiency Act, 31 U.S.C. § 1341(a)(1)(A), as the agency’s appropriations were not available for these prohibited purposes.

The EPA was desperate. That’s what happens when trying to push through this indefensible EPA and U.S. Army Corps of Engineers (Corps) rule. The agency used various types of social media, including Thunderclap. As explained by the EPA when urging public support for the rule, “[w]e hope you’ll support our clean water proposal. To help you do that, and get your friends to also voice their support, we’re using a new tool called Thunderclap; it’s like a virtual flash mob.” The message was sent to about 1.8 million people. The agency was acting like an advocacy group, not a government agency.

Even before this GAO opinion, Congress had more than enough reason to block funding for the implementation of the rule:

The real question isn’t why Congress should block funding for this water rule. Instead, it’s how Congress could possibly allow the rule to go forward in the first place.