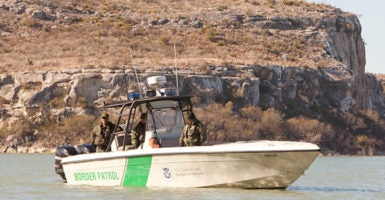 Due to its remote location, the Border Patrol keeps a close watch on the area west of Del Rio for drug smuggling and human trafficking from Mexico. (Photo: Robert Daemmrich/Photography Inc/Getty Images)

The Border Patrol is seeing an increase in migrants from African countries who are blending in with the large numbers crossing the southern border illegally through Central America.

Agents assigned to at the Del Rio, Texas, sector apprehended 116 individuals last week from African countries as they crossed the border from Mexico.

Those caught around 10:30 p.m. CT May 30 included nationals from Angola, Cameroon, and Congo.

The Del Rio sector encountered 182 large groups with more than 100 individuals during the current fiscal year, which began in  October. But this was the first encounter with African migrants, according to U.S. Customs and Border Protection, the parent agency to the Border Patrol.

“Large groups present a unique challenge for the men and women of the Del Rio Sector,” sector Chief Raul Ortiz said in a prepared statement. “This large group from Africa further demonstrates the complexity and severity of the border security and humanitarian crisis at our southwest border.”

“This is less a result of conditions in Africa and more a result of the dynamics of illegal immigration across the southern border,” Joshua Meservey, senior policy analyst for Africa and the Middle East at The Heritage Foundation, told The Daily Signal.

“I suspect the Africans we are seeing is a result of word circulating that traveling in groups means the odds are better,” Meservey said. “African migration is still far less common into the United States than in Europe.”

Federal laws requiring “catch and release” when an immigrant is accompanied by children have served as a magnet to would-be border crossers, and apprehensions are expected to reach a 12-year high.

“We’ve definitely had people other than Latin American across the world crossing the border,” David Inserra, homeland security analyst for The Heritage Foundation, told The Daily Signal. “Large group tactics have been effective.”