No Border Wall, but This Will Have to Do for 1 Texas City 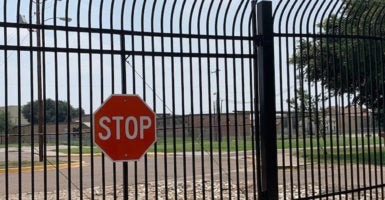 A 10-foot fence around Laredo College is more than a mile long and shields the campus from drug smugglers and illegal immigrants, the Border Patrol says. (Photo: Fred Lucas/Daily Signal)

LAREDO, Texas—Pulling up in an SUV outside the 10-foot-tall fence at Laredo College, Narcizo Ramos recalls the problems the school used to have with unwanted visitors.

“I actually came to this college as a student,” Ramos, a special operations supervisor for the U.S. Border Patrol, told The Daily Signal. “I can tell you, this little fence that seems like it’s small—before that, you would actually see illegal immigrants and drug mules running through the school campus.

The local college, with an enrollment of 12,000 students, finally had enough, said Ramos, a Border Patrol veteran of 19 years.

“It became such a nuisance to the college that they said, ‘We’ll erect our own fence,’” Ramos, 41, recalled. “It is actually pretty tall. It served its purpose. It did push the traffic they were seeing around it.”

Border Patrol officials and other advocates for a security wall along the southern border contend that although it wouldn’t stop illegal immigrants, it would slow them down and force them to cross the border in areas where they can be captured more easily.

Laredo, a city of 250,000, is a densely populated urban area along the southwest border that has no sections of wall to block entry by illegal immigrants who cross the Rio Grande River.

“We have no wall at all,” Joel Martinez, the Border Patrol deputy chief for the Laredo sector, told The Daily Signal during an interview at U.S. Customs and Border Protection’s Laredo station.

“We have maybe one or 1.2 miles of aesthetic wall that surrounds the [college] here, which is right on the river banks. But it’s exactly that; it’s just aesthetics,” Martinez added.

“It’s not a security wall at all, in no form or fashion. But no, we have no infrastructure here at all, whatsoever, unlike the rest of the border.”

The college erected the barrier around the school in 2007, according to the Border Patrol.

“It has served a purpose for them, to keep the movement of aliens limited through their college,” another Border Patrol special operations supervisor, Rafael Garza, told The Daily Signal as he stood outside the 10-foot barrier.

Some Laredo residents, as well as activists, have put up significant resistance to construction of a border wall in Laredo.

Laredo College’s security fence was a collaboration between the city government, the school, and the Border Patrol.

The office of Rep. Henry Cuellar, R-Texas, refers to the structure as 1 mile of fencing in a fact sheet about border barriers in Texas. The project began in 2005 under the college’s president at the time, Ramón Dovalina, according to news reports.

Laredo College’s media relations office, reached Wednesday by phone and email, did not provide an immediate comment for this report. Sandy Lugo, a public relations specialist, said the appropriate spokespersons were out of town.

The school’s 200-acre main campus is near the bank of the Rio Grande, a high traffic area for illegal border crossings.

The Border Patrol has captured 24,000 illegal immigrants in Laredo since October 2018, the beginning of the federal fiscal year. The daily catch varies between 120 and 150.

Laredo College, established in 1947, initially was known as Laredo Junior College. It became Laredo Community College in 1993, before adopting the current name in 2018.

The main campus used to be a military base, set up in 1849 to protect Laredo’s frontier. First known as Camp Crawford, it was renamed Fort McIntosh in honor of Civil War soldier who fought for the Confederacy, Lt. Col. James McIntosh.

The Fort McIntosh campus kept its historical origins. The college established a 60-acre campus in south Laredo in 2004 that features more contemporary architecture, according to the school’s website.