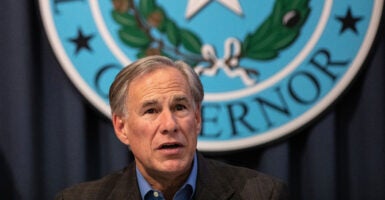 “Once they step back into the state, they will be arrested and brought back to the Capitol and we will be conducting business,” says Texas Gov. Greg Abbott, pictured during a Saturday briefing on border security in Austin. (Photo: (Tamir Kalifa/Getty Images)

Texas Gov. Greg Abbott says Democrats who fled the state to avoid voting on an election reform bill will be arrested upon their return.

Democratic members of the state House of Representatives left Texas to avoid being called to vote Monday on the election legislation. Under state law, two-thirds of House members are required for a quorum that allows votes.

“Once they step back into the state, they will be arrested and brought back to the Capitol and we will be conducting business,” Abbott said of the Democrats in an interview Monday night with Fox News Channel host Laura Ingraham.

Texas House rules say that the House sergeant-at-arms, or someone designated by that officer, may arrest absent lawmakers and return them to the House floor. That applies only inside Texas, which is why the Democrats left the state.

Texas House Democrats arrived Monday evening in Washington, vowing that they would not budge. A total of 51 Democrats must be present to achieve a quorum of all 150 members.

Democrats blocked a vote once before on the election measure, which Abbott and fellow Republicans say would increase the security of elections in Texas. Democrats, however, contend that if passed the bill would suppress voting.

Abbott called a special session to vote on the measure.

In April, the Texas Senate passed a reform measure that would extend early voting hours, prohibit election clerks from mailing out absentee ballot applications unless a voter requests one, and ban “drive-through” voting.

“Instead of showing up to represent Texans and pass popular election integrity laws, Texas Democrats walked out of the special session, boarded private jets to D.C., and abandoned their constituents,” Anderson said in a public statement.

The Daily Signal is the multi-media news outlet of The Heritage Foundation.

“With this political stunt, Texas Democrats turned their backs on the majority of Texans who support commonsense election integrity efforts like voter ID requirements and protections against ballot harvesting,” Anderson continued.

Texas has a long history of election fraud, said Hans von Spakovsky, manager of the Election Reform Initiative at The Heritage Foundation.

“Giving the sergeant-at-arms that authority is nothing unusual,” von Spakovsky told The Daily Signal in a phone interview Tuesday. “Walking out of a legislative sessions shows contempt for the democratic process and for the majority of voters.”