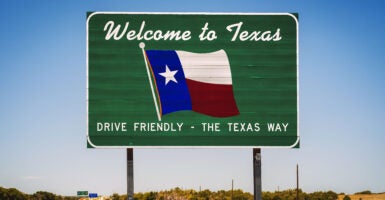 A group of Texas Democrats have literally fled the state in order to prevent election reform legislation from passing. (Photo: Getty Images)

If democracy dies, does any leftist care?

You’d think so: After all, we’ve had years of hand-wringing about the erosion of democracy in our nation, from The Washington Post’s “Democracy dies in darkness” motto to The New Yorker magazine fretting in a headline that “American Democracy Isn’t Dead Yet, but It’s Getting There.” No doubt, you’d think, the last thing liberals would want to see is state legislators thwarting the will of the people.

But you’d be wrong.

Instead of being eviscerated, the dozens of Texas Democrats fleeing the Lone Star State to prevent a vote in the state Legislature on proposed election reforms are being hailed as heroes.

Under Texas law, two-thirds of legislators must be present in a chamber for a vote to be held. The Democrats’ frenetic escape means there won’t be a quorum, and thus no opportunity—at least for now—for the election reform legislation to be passed.

“At least 58 Democratic members of the state House of Representatives are expected to bolt from Austin on Monday in an effort to block the [voting] measures from advancing,” NBC News reported Monday afternoon, citing an anonymous source. “The unusual move, akin to what Democrats did in 2003, would paralyze the chamber, stopping business until the lawmakers return to town or the session ends.”

Once, the left understood that such shenanigans were hardly pro-democracy. When Oregon Republicans pulled a similar stunt in 2020, Vox headlined an article: “Oregon Republicans are subverting democracy by running away. Again.” In the commentary, author David Roberts lamented, “It is an extraordinary escalation of anti-democratic behavior from the right, gone almost completely unnoticed by the national political media.”

But now, Texas Democrats—unlike the Oregon Republicans—are on the “Right Side of History.”

Vice President Kamala Harris lauded the Texas Democrats for “showing extraordinary courage and commitment” and called them “leaders who are marching in the path that so many others before did, when they fought and many died for our right to vote.”

Former Housing and Urban Development Secretary Julian Castro, a former mayor of San Antonio and a new addition to NBC and MSNBC, tweeted, “I’m proud of Texas Democrats for once again showing Washington what it looks like to fight for our democracy and voting rights.”

Former Planned Parenthood President Cecile Richards, whose mother served in the early 1990s as governor of Texas and who now co-chairs a leftist group, American Bridge, tweeted, “So damn proud of the Democrats in the Texas legislature standing for voting rights and democracy! History has its eyes on you!”

So, just to reiterate: Texas held lawful elections, and in the course of those elections, the people elected more people in favor of certain election reforms than not … and yet the truly democratic, people-first thing to do is ensure the majority can’t pass legislation. Funny, I must have missed that civics class about how democracy was about the will of the minority being upheld.

And what exactly is in this egregious legislation that must be stopped at all costs?

Well, according to The Texas Tribune, the oh-so-controversial election bills would nix 24-hour early voting, but require more time for early voting.

The Tribune also reported that both the state House and Senate versions of the bills “prohibit local election officials from sending unsolicited applications to request a mail-in ballot” and “bills would set new ID requirements so voters must provide their driver’s license number, or if they don’t have one, the last four digits of their Social Security number on applications for [vote-by-mail and returned] ballots.”

That’s hardly despotic legislation that would make it impossible to vote. In fact, Texas is beating some blue states on voting access. Heritage Action for America notes that “Texas offers 2 weeks of in-person early voting, more than New York or New Jersey. If the proposed reforms pass, Texas would have longer early-voting hours than in Maryland and New Mexico. (The Daily Signal is the news outlet of The Heritage Foundation, and Heritage Action for America is the grassroots partner organization of The Heritage Foundation.)

But apparently facts don’t matter—at least not when it comes to voting reforms or democracy.