We Hear You: Visiting the Border Patrol in Laredo, Texas 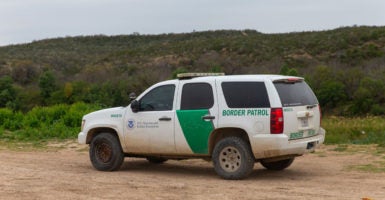 Editor’s note: The Daily Signal’s audience responded to the reporting our Fred Lucas did from the U.S.-Mexico border at Laredo, Texas. Here’s a sampling. Write us at [email protected]—Ken McIntyre

Dear Daily Signal: I live on Social Security and do not have funds to donate, but I read and appreciate the information The Daily Signal publishes.

I am 81 and have witnessed many changes over many years, including times of no drug cartels, no murders, and no drug problems (“I Toured the Texas-Mexico Border. Here Are 8 Things I Learned.”). People who relocated to our country became our friends.

We have turned into a nation of distrust for the very reasons Fred Lucas has reported here. I worked with Mexicans whom I easily can compliment for their worth ethic. I know some were illegal.

My heart breaks for the honest, hardworking foreigner who must look over his or her shoulder wondering if they will be caught.

My deep respect for Border Patrol officers is not limited. I support the border wall, but the number of illegals presently in our country will never be resolved until a system is developed under which legal immigrants are welcomed. I believe the wealthy in our country contribute millions of dollars to encourage illegal immigration.

Think about the drug cartels and the terrorists who have made their way across the border. Does any one of the objectors to a border wall care what is happening to the country we are proud of? It is no more.—Virginia Vinson

The Democrats obviously care about vilifying and perhaps impeaching our president, promoting anti-Semitic, anti-Christian, and anti-American conversations, and avoiding any meaningful legislation for immigration.

Last but not least, Democrats want socialism and to strip us of Second Amendment rights, the last bastion of freedom.

What has happened to the loyal opposition? They’ve forgotten to be Americans.—Tom Heroux, Tequesta, Fla.

Fred Lucas reports that a Mexican drug cartel controls a section of the southern border. It holds illegal immigrants and threatens them with torture and death unless their families pay.

If Mexico is unable to enforce its own laws, they need to ask the U.S. military for help. Mexico should be enforcing the death penalty for drug cartel bosses and all human traffickers (coyotes).—Drew Page

This is really war. Time to send the troops down there and defend this nation.

Many of these people are not even from Mexico or Central America, but from other nations that want to bring America down.—Mary Annabelle Martin

We should put a bounty on illegal aliens and make it a class A felony to be here illegally. It should be punishable by a death sentence, with aiding and abetting drawing the same punishment.

The free stuff is over; get a job and pay for your own health care. Want a better job? Go to college and pay for it, like everyone before you. It will make you appreciate how hard it is in the real world and change your reality. The world owes you nothing.

Defend our borders or stop receiving a paycheck for doing nothing. I say shut down all business with all who oppose our immigration laws.

We don’t need any country to get along; it will only make us stronger as a country. We’ll build the wall ourselves and kick out worthless slimeballs.—Dennis Anderson

If the Democrats don’t think our borders should be controlled, then they don’t think the country is worth protecting.

It’s the liberal Democrats who are causing all of this by not allowing the wall and proper entry points to be built. I would not be surprised if some are on the take from the cartel.—Joseph Morgan

Dear Daily Signal: Now that Laredo College’s secret is out with Fred Lucas’ report, the Democrats will hightail it to the nearest “friendly” judge (“No Border Wall, but This Will Have to Do for 1 Texas City”).

They’ll have the judge wave his paw and demand the gate be opened and the fence taken down immediately. And that the cafeteria and nurse’s office be made available to everyone.—Marty Miller

Democrats say that there is no crisis at the border, and some dummies want to tear down the walls. It looks like Democrats need to get to Laredo College and be set straight.—Susan Short

Dear Daily Signal: Don’t expect a rational response from Democrats to Fred Lucas’ article about what the Border Patrol does for illegal immigrants (“‘Daily, Our Agents Save Somebody’s Life’: Border Patrol Agents Recall Cases of Heroism and Compassion”).

His noted accusation by Rep. Lauren Underwood, D-Ill., that federal immigration officials “wanted these deaths to occur” is as typical as it is outrageous.

Blaming our Border Patrol agents for the deaths of illegal immigrants at the hands of foreign human traffickers is as stupid as blaming the U.S. for having borders and immigration laws.

All the Democrats want are hordes of illegal immigrants who will become completely dependent on government, a government run by them, for all of life’s necessities.

Thank you for Fred Lucas’ story on the compassion at the border by our Border Patrol agents. I loved it.

The left-wing media sees to it that all we hear is negative. I appreciate this refreshing story.—Debi Godsey

Hundreds of thousands of migrants cross the southern border every year. A handful die under Border Patrol watch, and the media has a conniption fit.—Dan Stewart

All these stories of distress at the border and no one has a solution (“‘Full-Blown Emergency’: Southern Border Arrests Surge”). All this does is frustrate the readers of The Daily Signal.

The only way to solve this issue is a massive program of demand to the House of Representatives. But no one knows how to do this, so the frustration goes on.—Bob Robb

Editor’s note: Bob, you and other readers may wish to check out The Heritage Foundation’s “An Agenda for American Immigration Reform,” a report outlining what to do, step by step, to fix the immigration system.

I think it’s time to suspend the Flores Agreement. And here’s a question: These people are asking for asylum because they fear the gangs. Well, what makes them think the gangs aren’t also coming north?—Terry Shields Sr.