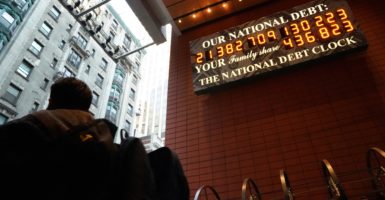 The federal government has more programs than anyone can ever hope to count. Each year it spends trillions of dollars, much of which is wasted or used for politically connected groups.

This has shamefully saddled America with a disastrous debt of $22 trillion—the equivalent of $173,000 for every household in America.

All of this might seem impossible to overcome. However, Heritage Foundation experts have provided Congress and President Donald Trump with a way out.

The plan would refocus federal activity on core priorities such as national defense while saving hard-earned taxpayer dollars through thoughtful reforms and commonsense eliminations of programs that are wasteful, duplicative, and outside the scope of federal responsibility.

The Community Development Block Grant supposedly provides assistance to poor communities, and in recent years it has become a regular part of disaster legislation.

However, it often acts as a slush fund for dubious projects that local governments can’t justify funding on their own, such as LED lighting on a monument, expanding a brewery, and promoting “sustainable cheddar.”

In addition, sub-par targeting means that some funds end up in high-income areas. After three decades and over $200 billion spent, it is time to end the program and allow states, localities, and communities to better meet their own needs.

The Supplemental Nutrition Assistance Program, commonly known as food stamps, is the second-largest means-tested welfare program. With enrollment more than doubling since 2000 even with today’s strong economy, there are ways to ensure that the program only helps those it is supposed to.

Reforms such as work requirements for able-bodied adults, closing eligibility loopholes, and counting the income of noncitizens in a household would make the program more affordable and fairer for taxpayers.

The federal government taxes distilled spirits at $13.50 per proof gallon. The government then gives a “cover-over” of $13.25 per gallon collected on foreign rum to governments in Puerto Rico and the U.S. Virgin Islands, which incentivizes local production and has led to a subsidy war between the territories.

It would be prudent to cut off the special treatment that is sweet for the islands (and rum producers) but leaves a hangover for the rest of the country.

One of many factors underlying America’s high health care spending is the cost of liability insurance. Since the federal government spends well over $1 trillion per year on health programs, this affects taxpayers greatly.

By imposing reasonable caps on damages, a statute of limitations, and other liability reforms for federal health programs, the medical liability system would be more cost-effective for doctors and less congested for patients with legitimate claims.

Americans are a generous people. In addition to spending hundreds of billions of dollars every year on “popular” art, nearly $20 billion per year is given to charities for art and cultural activities.

Federal patronage of the arts is therefore pointless and often goes toward questionable causes such as the Cowboy Poetry Gathering, which itself is 97% privately funded. The nation’s culture will continue to flourish if these programs are shuttered.

There are many reasons why the federal government uses private contractors to perform construction projects, one of the foremost being that they are more efficient.

Yet the Davis-Bacon Act, which mandates that the federal government pay “prevailing wages” (typically interpreted as “union wages”) for construction jobs, prevents the efficiencies of the free market from saving taxpayers money.

It makes no sense to require the government to pay so-called prevailing wages that are significantly higher than the true market wage. The Davis-Bacon Act is outdated, wasteful, and should be discarded.

The Food and Drug Administration is trusted to regulate seafood, with one exception: catfish. A provision in the 2008 farm bill mandates separate inspection for catfish by the Department of Agriculture.

This change, which only recently went into effect, was pushed on behalf of catfish producers in the gulf coast region and has no legitimate safety justification.

It is already causing headaches for the seafood industry due to facilities needing to comply with both USDA and FDA rules at the same time. The federal government should cut bait on this fishy program.

There remains a lingering impression that government workers receive less compensation than those in the private sector. In reality, the total cost of federal employees (including benefits) far exceeds what is standard for businesses, especially when it comes to retirement benefits.

Normalizing federal benefits would save a tremendous amount of money for taxpayers and ensure fairness for both sides.

Federal involvement in airport security should focus on setting security rules and regulating screenings performed by private contractors rather than employing thousands of airport screeners. The privatization model has worked for Canada and Europe, and would produce real savings and more accountability in America.

On May 8, the Senate used valuable floor time to confirm board members to the federal government’s Export-Import bank, which subsidizes foreign financing of U.S. exports.

The institution has a long history of cronyist mismanagement. Further, with several ongoing trade disputes, this is a terrible time for the federal government to further meddle in the marketplace, since that is precisely what we complain about other governments doing.

The Export-Import Bank’s functions should be left to the financial industry, which would be fairer for businesses both at home and abroad.

These proposals merely scratch the surface of the “Blueprint for Balance.”  The plan is ambitious, yet it is necessary to address the amount of waste and dysfunction in the federal government.

A more prosperous and secure future for America depends on leaders making politically difficult decisions and the public holding them accountable if they do not.