Why VW Workers Have More to Lose Than Gain From Unionizing 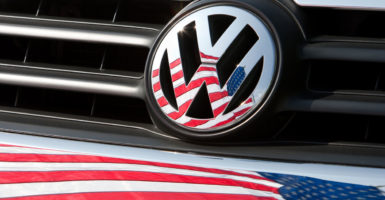 An American flag is reflected in the chrome of a Volkswagen in Chattanooga, Tennessee. (Photo: Friso Gentsch/Picture Alliance/Getty Images)

History has an important lesson for autoworkers at the Volkswagen plant in
Chattanooga, Tennessee, where the United Auto Workers union plans to hold a vote soon to unionize workers.

When it comes to VW’s Chattanooga workers, unionizing is more likely to prevent expansion by the company and threaten jobs than it is to bring about higher wages and better working conditions.

Consider some history on U.S. auto manufacturing and the UAW’s role in its decline.

For decades, almost the only cars Americans could buy were those built by [UAW] members. And because the Detroit automakers could collectively raise prices, the union could negotiate above-market pay.

Once foreign automakers entered the market, this system began to collapse. Consumers could (and did) take their money elsewhere, so Detroit eventually had to cut costs.

Domestic auto production is at less than half the level today as it was just two decades ago in 1999, and the UAW is undoubtedly at least partly to blame for driving labor costs to unsustainable levels.

A 2008 Heritage Foundation report found that the average hourly compensation cost for UAW workers at Ford, General Motors, and Fiat Chrysler was more than $73 per hour.

That’s more than twice the current $36 per hour average cost of employee compensation across the U.S.

And despite the fact that the UAW was partly to blame for the U.S. automakers’ near-bankruptcy, the UAW nevertheless effectively received the entirety of the $23 billion taxpayer bailout of the automakers.

As Todd Zywicki and Sherk wrote in a 2012 Wall Street Journal opinion column, the “preferential treatment given to the United Auto Workers accounts for the American taxpayers’ entire losses from the bailout.”

If the VW workers unionize, and the UAW strong-arms the company into the same type of unsustainable wages and compensation, Volkswagen might decide to close up its U.S. operations altogether or to move its Chattanooga plant elsewhere—further south—where it can secure sustainable labor costs.

Labor costs have been a primary driver of the southern shift in manufacturing in the U.S. As economist Dave Swenson of Iowa State University noted, “Initially, half of the propensity to move plants was to escape union contracts and to take advantage on non-union right-to-work states.”

So, if the UAW has forced companies to close doors and workers to lose jobs, why would VW’s Chattanooga employees want to unionize?

Historically, the original impetus for unionization was to secure fair wages and compensation, achieve safer working conditions, and to gain a voice with management.

It appears, however, that VW’s Chattanooga employees already have that.

In January, the Top Employers Institute certified VW Chattanooga as one of just 23 U.S. employers to receive the Top Employer distinction. Among the company’s benefits: comprehensive medical, dental, and vision benefits; a 401(k) match; paid maternity and paternity leave; tuition reimbursement; and a vehicle lease program for employees and their family members.

Current starting pay for hourly workers is $15.50 and tops out at $23, but VW recently announced a 50-cent hourly increase effective July 1s, bringing the hourly range to between $16 and $23.50 for team members and up to $30.50 for maintenance workers. This raise was an effort to increase base wages and maintain an upward earnings trajectory.

Employees also receive quarterly bonuses. In the first quarter of 2019, hourly employees received a bonus equal to 4% of their quarterly earnings “just for showing up to work” and up to 16% based on factors such as productivity, safety, and quality.

Pay isn’t everything, though. Employees want a fair and safe workplace, and they want their voices to be heard. VW seems to be on top of that also.

According to one VW worker with whom I spoke on the phone, the company is quite supportive of its workers and has “very friendly” employee policies. That includes clear guidelines for the company’s “corrective-action program,” which involves a four-level process before an employee is terminated and a “peer review” process whereby terminated employees have the opportunity to appeal their termination among a randomly chosen panel of their peers.

Moreover, from employees’ perspective, Volkswagen has recently taken extra measures to listen to employees and make changes they desire. Last year, for example, the company changed to a fixed-shift schedule (as opposed to rotating day/night shifts), based on employee input and a vote by team members.

These favorable working conditions are good news for the estimated 1,000 new employees that VW Chattanooga will employ over the coming years, following the company’s announcement that it will invest $800 million in the Tennessee plant to build electric vehicles.

Things seem to be going pretty well both for workers and management at VW Chattanooga, so why the impetus to unionize?

Well, things aren’t going quite as well for the UAW, which suffered a 9% decline in membership in 2018.

And the union had to spend millions (of employees’ dues) on legal fees and damage control after a corruption scandal in which federal prosecutors said the UAW’s Fiat Chrysler Automobiles department was “riddled with corruption” and “fatally compromised in its ability to represent the best interests of the UAW’s members and their families.”

But each of VW’s roughly 1,500 current hourly employees, and the estimated 1,000 forthcoming ones, would provide the UAW between about $480 and $950 in annual dues to the UAW. Assuming an average wage of $20 per hour, 2,500 new UAW members from the VW Chattanooga plant would inject $1.8 million in new revenues into the union each year.

Before VW Chattanooga workers vote on whether or not to unionize and send part of their paychecks to the UAW, they should consider whether doing so is more likely to gain them higher pay and better working conditions—or limit their opportunities to grow and potentially cost them their jobs.

The experience of other U.S. unionized autoworkers suggests the latter.

This article has been corrected since the original source of the quarterly bonuses was not accurate.