The Green New Deal Is a ‘Guise’ to Usher in Socialism, Lawmaker Warns 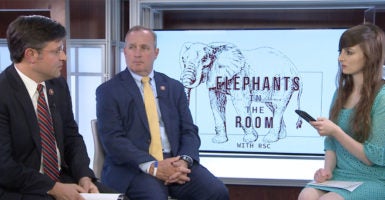 Reps. Mike Johnson, R-La., chairman of the Republican Study Committee (left), and Jeff Duncan, R-S.C., sit for an interview with The Daily Signal's Rachel del Guidice for the GOP group’s second episode of “Elephants in the Room” on Facebook Live on Tuesday. (Photo: Daily Signal)

“This is something that should concern every single American, because it will impact their pocketbooks. It will impact their families. It would, in a literal sense, change the very nature of our country,” Rep. Mike Johnson, R-La., chairman of the Republican Study Committee, said Tuesday in an interview with The Daily Signal for the group’s second episode of “Elephants in the Room” on Facebook Live.

“It is a guise, I think, to usher in the principles of socialism,” he added.

“Elephants in the Room,” launched April 9, is a live series hosted by The Daily Signal, where Republican Study Committee members address pressing issues of the day.

Freshman Rep. Alexandria Ocasio-Cortez, D-N.Y., who has sponsored the Green New Deal, is headlining a rally May 13 in Washington, D.C., in support of the legislation.

The Green New Deal, introduced in the form of a nonbinding resolution Feb. 7, would, among other things, “phase out conventional fuels (that is, oil, natural gas, and coal) by 2030 … ; implement a federal jobs guarantee; retrofit all U.S. buildings; overhaul transportation with high-speed rail; and provide universal health care,” Heritage Foundation scholar Lee Edwards wrote in a recent commentary.

“We are ‘all-of-the-above’ folks” supporting a wide range of energy sources, Johnson said. “We believe not only in the president’s vision for energy independence, but energy dominance. We achieve that … through private-sector innovation, not government regulation.”

Rep. Jeff Duncan, R-S.C., the co-chairman of Congressional Republicans’ House Energy Action Team, said the Green New Deal would dismantle the gains the economy has made as a result of President Donald Trump’s policies.

“For the first time in my lifetime, we have jobs seeking employees, versus employees seeking jobs, and so, Trump policies, Republican policies, with taxes and with energy, have actually worked in this economy, and I don’t know why the Democrats would want to throw cold water on a robust economy,” Duncan said.

Johnson said the Green New Deal would force the American people to make drastic adjustments to their lifestyles to pay for the legislation, which he said “would do nothing” to improve the environment.

Duncan said his Republican colleagues should instead be more focused on ways the country can capitalize on its abundant natural oil and gas reserves to promote energy independence and dominance.

“Energy dominance, being a nation of [exporting] crude oil and natural gas is not talked about enough by Republicans,” Duncan said. “We are not just meeting our domestic needs now. We have a surplus, and we are able to send it around the globe to improve the lives of people in poverty right now, in Africa or Third World countries.”