The True Meaning of That Green New Deal 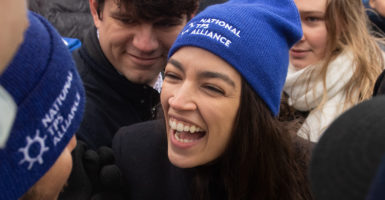 Rep. Alexandria Ocasio-Cortez, D-N.Y., arrives Tuesday to speak during a rally outside the White House to support beneficiaries of the Obama administration program called Deferred Action for Childhood Arrivals and others with temporary protected residency status. (Photo: Saul Loeb/AFP/Getty Images)

It would be easy to dismiss the Green New Deal as an impossible progressive dream, but that would be a mistake.

The Green New Deal is not the bucket list of Rep. Alexandria Ocasio-Cortez and her fellow travelers, but a blueprint to turn America into a socialist state. It is the culmination of a 90-year campaign, begun with FDR and the first New Deal.

“The first obligation of government is the protection of the welfare and well-being, indeed the very existence, of its citizens,” presidential nominee Franklin D. Roosevelt said at the 1932 Democratic National Convention.

Roosevelt said that in the depths of the Great Depression. In electing him, a panicky American people, faced with 25 percent unemployment, a plummeting stock market, and cashless banks, accepted a new leading role for the federal government after 150 years of free markets and representative democracy.

Since then, successive waves of progressives have worked to expand and extend the government through Harry Truman’s Fair Deal, LBJ’s Great Society, Bill Clinton’s Third Way, and Barack Obama’s transformative Obamacare. The only president who sought to reverse the swing to socialism was Ronald Reagan, and even he said he would not attempt to do away with the New Deal.

Sponsors of the Green New Deal—including Ocasio-Cortez, D-N.Y., and Sen. Ed Markey, D-Mass.—list these goals: Phase out conventional fuels (that is, oil, natural gas, and coal) by 2030, only a decade from now; implement a federal jobs guarantee; retrofit all U.S. buildings; overhaul transportation with high-speed rail; and provide universal health care.

Scant mention is made of the cost of this radical “retrofit” of America and who would pay for it. It’s easy being green when all you have to do is pick other people’s pockets.

No wonder that, according to one poll, half of millennials say they would prefer to live under socialism rather than capitalism. Entitlement is all they and their parents and their grandparents have known. They think they are entitled to a free education, free health care, a job whether they want one or not, subsidized housing, and (who knows?) free pot.

No one has bothered to teach millennials the lessons of socialism, such as the tragic story of Venezuela. Once one of the wealthiest countries in Latin America, it is now ravaged by runaway inflation and massive government corruption and ruled with an iron fist by a socialist dictator.

No one has bothered to teach millennials about the miracle of India, which has switched from a broken socialist system to an expanding, neocapitalist economy that has created a middle class of 300 million, the largest in the free world.

No one has bothered to teach millennials the first law of socialism—abolish private property. So, millennials, hand over your iPhone and iPad.

No one has bothered to teach young Americans that the second law of socialism is that religion is an opiate of the people and will be terminated. Instead, you will be obliged to worship Big Brother.

No one has bothered to teach millennials that neither Denmark nor Sweden is a socialist country, but have put their industries in the hands of entrepreneurs who live by the rules of a free market economy.

The Green New Deal is a direct threat to the American spirit, which would be transformed irretrievably if it became law. But its introduction as a nonbinding resolution in Congress represents an opportunity to promote the American spirit.

As Ed Feulner and Brian Tracy wrote, in 1776 the American spirit—courageous, optimistic, enterprising, devout, generous, and devoted to liberty—gave rise to a novus ordo seclorum, a “new order for the ages” that allowed ordinary men and women to chart their own destiny.

As it was then so it is now, if Americans are willing to accept their destiny.