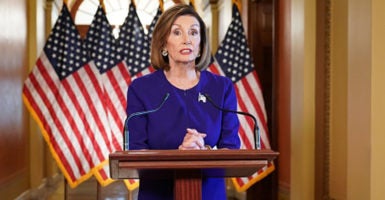 Invoking the Founding Fathers, House Speaker Nancy Pelosi said Tuesday that existing investigations of President Donald Trump would continue “under that umbrella” of an impeachment inquiry.

Pelosi, D-Calif., who has long resisted the push by the left wing of her party to impeach the president, was moved by the recent questions surrounding Trump’s admission that he asked Ukrainian President Volodymyr Zelenskyy in a July phone call to investigate the business dealings in that country of former Vice President Joe Biden’s son, Hunter Biden.

Pelosi called that a “betrayal of our national security and betrayal of the integrity of our elections.”

“For the past several months, we have been investigating in our committees and litigating in the courts so the House can gather all the relevant facts and consider whether to exercise its full Article 1 power, including the constitutional power of the utmost gravity, approval of articles of impeachment,” Pelosi said. “This week, the president has admitted to asking the president of Ukraine to take actions which would benefit him politically.”

The president must be held accountable. No one is above the law.

The president responded in a series of tweets, calling it “witch hunt garbage” and “presidential harassment.”

When speaking to a group of foreign policy experts, former Vice President Joe Biden previously said he had threatened to withhold $1 billion in U.S. aid to Ukraine if the country’s government did not fire a prosecutor who was investigating the Ukrainian natural gas company Burisma, for which son Hunter Biden worked as a board member.

McCarthy said what Pelosi announced Tuesday, without a House vote, is no different from the investigations that committees already have been doing.

The House Judiciary Committee, which would be charged with approving articles of impeachment, was already involved in “impeachment proceedings” and held its first “impeachment hearing” last week.

Pelosi ignored this question from a reporter: “What does this accomplish if the Senate doesn’t convict?”

A Republican-controlled Senate is unlikely to vote to remove Trump from office.

Trump has insisted there was nothing improper about the call to Ukraine’s new president, and the Ukrainian foreign minister said there was “no pressure.”

The Wall Street Journal reported Friday that Trump repeatedly asked the Ukraine leader for a probe of Hunter Biden, but also said there was no quid pro quo regarding U.S. funds for the country. However, delivery of the congressionally approved funds had been stalled.