US Politics Threaten to Derail Ukraine’s Peace Talks With Russia 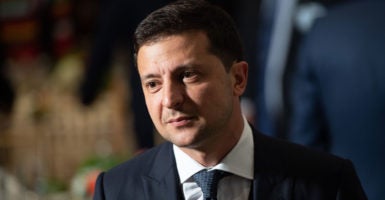 KYIV, Ukraine—Ukraine is at a crossroads. After more than five years of war against Russian forces in its eastern Donbas region, the former Soviet republic is finally inching toward a peace deal with Moscow.

Yet a political scandal in the U.S.—in which Ukraine plays a central role—threatens to complicate matters, some Ukrainian experts say. The scandal may jeopardize the durability of bipartisan support in Washington to help Ukraine defend itself from Russian aggression, they say.

Trump acknowledged Sunday that he spoke on the phone to Zelenskyy about Biden. The president said he did nothing wrong, maintaining that Biden’s son, Hunter, should be investigated for his business dealings in Ukraine.

Trump said Tuesday that he will release on Wednesday “the complete, fully declassified and unredacted transcript” of the phone call with Zelenskyy.

Trump and Zelenskyy were set to meet for the first time Wednesday on the sidelines of the United Nations General Assembly in New York.

Some Ukrainian experts warn that fallout from the unfolding controversy could turn support for Ukraine into a partisan issue among U.S. lawmakers.

“The whole image of this situation is very bad,” said Mykola Bielieskov, deputy director of the Institute of World Policy, a Ukrainian think tank. “It might send to Russia the wrong kind of signal.”

“So, in no way should Ukraine be engaged in this process—either on the part of Republicans or Democrats,” Bielieskov said.

Ukraine’s foreign minister, Vadym Prystaiko, told the Ukrainian news agency Hromadske in an interview that Trump did not pressure Zelenskyy to investigate Biden or his son.

“I know what the conversation was about and I think there was no pressure,” Prystaiko told Hromadske. “There was talk, conversations are different, leaders have the right to discuss any problems that exist. This conversation was long, friendly, and it touched on a lot of questions, including those requiring serious answers.”

Prystaiko went on to suggest that Ukraine’s entanglement in the Trump controversy was due to the “evil intentions of certain people,” saying:

I think that the situation that’s taking place between Ukraine and the U.S., this confrontation between Republicans and Democrats someone is trying to drag us into, all these speculations that Ukraine helped the Democrats, that we wanted a President Clinton, instead of President Trump, this is, alas, a result of misinformation and evil intentions of certain people.

Apart from Prystaiko’s comments, Kyiv has been relatively tight-lipped about the details of the July 25 phone call between Trump and Zelenskyy—a tactic praised by many Ukrainian experts, who say Zelenskyy’s best move at this stage is to stay out of the media limelight.

“It’s very good that Zelenskyy’s office made no public comments on the content of the telephone conversation as it might be used by Democrats as part of domestic political strife,” Bielieskov said.

The Obama White House did not approve delivery of lethal weapons to Ukraine. On Trump’s watch, however, the U.S. has sent Ukraine Javelin anti-tank missiles and advanced sniper systems.

“I remember the previous administration refusing to send defensive weapon systems to Ukraine. This president has chosen to do that not once, not twice, but now three times, so that the Ukrainian people could fight back against the overtaking of southeast Ukraine,”  U.S. Secretary of State Mike Pompeo said Sunday on Fox News Channel.

“You remember,” Pompeo added, “it was the previous administration that allowed [Russian President] Vladimir Putin to take one-fifth of the Ukrainian country.”

U.S. weapons aren’t enough to change the course of the war—Ukraine, notably, is among the world’s top arms manufacturers. Yet the inflow of lethal U.S. weapons such as the Javelin, along with the sum total of U.S. aid, sends an invaluable message to Moscow about the seriousness of U.S. support for Ukraine, many officials, experts, and soldiers say.

“Ukraine has enjoyed widespread bipartisan support in Washington,” said James Brooke, editor-in-chief of Ukraine Business News. “It would be a shame … if one-third of Republicans go wobbly on supporting Ukraine.”

Trump withheld roughly $400 million in defense aid to Ukraine more than a week prior to his July phone call with Zelenskyy, The Washington Post reported. U.S. officials released the funds weeks later, the newspaper reported.

Trump told reporters at the U.N. General Assembly on Tuesday that he withheld the aid because European nations weren’t doing their fair share of assisting Ukraine—leaving the lion’s share of the effort to the U.S.

“My complaint has always been, and I’d withhold again and I’ll continue to withhold until such time as Europe and other nations contribute to Ukraine because they’re not doing it,” Trump said.

Earlier, Trump had said he withheld the funds over concerns about “corruption” in Ukraine.

Since the war began in 2014, the European Union has provided Ukraine with 3.3 billion euros in loans—the most money ever made available by the EU to a nation outside the bloc.

The EU’s financial assistance is contingent on Ukraine meeting certain anti-corruption reform benchmarks. The latest tranche of $500 million euros in EU loans was approved for delivery in November, just weeks after a naval confrontation between Ukrainian and Russian forces in the Black Sea.

According to the website of the U.S. Embassy in Ukraine, total U.S. aid for Ukraine stood at $454.3 million in fiscal year 2017, the last year with complete data available. That number was about $500 million in fiscal 2016, according to government data on the U.S. Agency for International Development website.

“In the end, all the assistance is approved by Congress and that’s why bipartisan consensus is much more important for Kyiv than Trump’s personal attitude toward our country,” the Institute of World Policy’s Bielieskov said.

No Such Thing as Bad PR

With U.S. media attention trained on Ukraine, some Ukrainians say the moment could be an opportunity for the country to highlight its progress in combating corruption since street protests ousted the pro-Russian Viktor Yanukovych from Ukraine’s presidency in 2014.

“Paradoxically, this could in one way play well for Ukraine,” said Maksym Bugriy, director of the foreign and security policy program at the International Institute for Public Policy, a think tank in Kyiv.

“Zelenskyy’s team is not making a single wrong step in this delicate situation,” Bugriy said. “Of course, this is short-term scandalous publicity, but I am sure that it will not necessarily negatively affect Ukraine.”

The war in the Donbas is ongoing and has so far killed more than 13,000 Ukrainians. Europe’s only ongoing land war is fought from trenches along a roughly 250-mile-long, static front line.

A Chance for Peace

Zelenskyy, 41, is a comedian and former TV star who won in an electoral landslide over incumbent President Petro Poroshenko in April. Upon assuming the presidency, Zelenskyy made securing a peace deal with Russia a priority for his administration.

To that end, Zelenskyy and Putin have discussed relaunching the so-called Normandy Format peace negotiation framework, which comprises representatives from Ukraine, Russia, Germany, and France. Ukrainian officials say such a meeting could happen by mid-October.

A long road lies ahead for Kyiv to secure a durable peace with Russia. But some signs indicate the two sides are now closer than ever to striking a deal.

In particular, a large-scale prisoner swap Sept. 7 between Ukraine and Russia was seen by many in Ukraine as a positive step toward revamped peace talks.

The prisoner swap “opened chances for an action plan on de-occupation and restoration of peace where Ukraine and Russia can move on,” Valentyn Nalyvaichenko, former head of the Security Service of Ukraine, told The Daily Signal.

Brooke added that recent protests, as well as Russia’s moribund economy—hit hard by Western sanctions levied as punishment for Moscow’s aggression against Ukraine—have spurred Putin to seek a “face-saving solution” to extricate Russia from its military campaign in the Donbas.

While polling shows that the war is the issue of top concern for most Ukrainians, Zelenskyy’s peace overtures have not been received with universal praise in Ukraine. Some quarters (especially among military veterans) are resistant to any negotiated settlement with Russia—a country perceived by many in Ukraine to be an occupying invader.

“Our task, the task of diplomats, unfortunately, is to negotiate, which absolutely doesn’t give us strength or pleasure, so that we can get out of the situation with the least losses,” Prystaiko, Ukraine’s foreign minister, said Wednesday in Kyiv. “If you think that diplomats can agree without compromise—it is naive, and unfortunately, that won’t work.”

As winter approaches, Ukrainian officials also are engaged in tricky negotiations with Russia’s gas conglomerate, Gazprom, over maintaining Russian gas transit contracts through Ukraine to the rest of Europe.

U.S. officials have said that Russia’s Nord Stream 2 pipeline, currently under construction in the Baltic Sea, is part of a broader Kremlin gambit to bypass Ukrainian transit pipelines, which have delivered the lion’s share of Russian natural gas exports to Europe for decades.

Ukraine has a contract with Gazprom for $3 billion in annual gas transit fees. That contract, however, is set to expire in 2020. Ukraine’s prospective annual loss represents a little more than 8% of its 2018 budget of $36.4 billion, and roughly 2.4% of the country’s 2018 gross domestic product.

Prystaiko said Friday that a “big deal” with Russia is in the works, “including not only the solution to the Donbas issue, but also, for example, Ukraine’s energy security.”

With so much at stake, Volodymyr Sheredeha, 27, a Ukrainian combat veteran of the Donbas war and a journalist, said the U.S.-Ukraine relationship would, in the long run, emerge unblemished by the controversy over Trump’s phone call with Zelenskyy.