To Sen. Cory Booker, Gun Ownership Is a Privilege and Not a Right 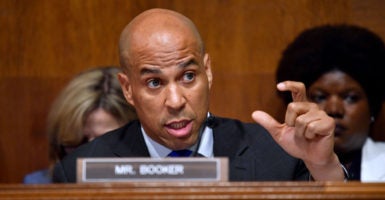 Sen. Cory Booker, D-N.J., released his plan Tuesday to combat firearm-related violence. For starters, most of it would violate the Constitution.

Booker’s 14-point plan includes measures that have become a staple in progressive and anti-gun circles, such as universal background checks and bans on the civilian possession of semi-automatic rifles or factory-standard magazines capable of holding more than 10 rounds.

Although those initiatives would be bad enough, Booker’s plan goes far past these troubling ideas.

Notably, he calls for mandatory gun ownership licenses that must be reobtained every five years. In order to purchase or possess a firearm—the most basic exercise of the Second Amendment right—a person would be required to pass a background check, submit his or her fingerprints, and complete a gun safety course of unspecified length, cost, and  availability.

Even more concerning, the person seeking a firearm would be required to “sit for an interview” with an unspecified government official who would determine whether that person should be trusted with a firearm.

Booker’s plan already has been called “ambitious,” “bold,” and “sweeping” by various media outlets. While it is certainly all of those things, it is much more deserving of several other descriptors: patently unconstitutional, decidedly un-American, and grotesquely ineffective.

The most problematic part of Booker’s plan is that almost all of it would violate the Constitution. The Second Amendment protects the right of the people to keep and bear arms, but Booker treats gun ownership as a mere privilege that may be granted if the government determines via an interview that it’s OK with it for you to possess a firearm.

In fact, the whole purpose of the Second Amendment was to prevent the government from determining which law-abiding citizens could or could not arm themselves, while the 14th Amendment was in large part an effort to ensure that state governments could not do so, either.

Under no circumstances would we argue that the government may require law-abiding citizens to seek its permission and undergo extensive training prior to exercising any other constitutional right.

You do not need a license to speak or to exercise your religious beliefs. You need not take a basic journalism course prior to publishing a book, nor must you be trained in political theory prior to petitioning the government for grievances.

The entire point of the Bill of Rights is that the government may not impose substantial burdens and require you to seek permission prior to taking these actions.

And yet to Booker, the right to keep and bear arms effectively would be removed from the Constitution, relegated not just to second-class protection but to no protection at all—law-abiding citizens must now actively convince the government that they deserve a gun. It is the Bill of Rights turned on its head.

Moreover, the Supreme Court already has clearly indicated—and rightfully so—that the Second Amendment protects the right to keep and bear all arms commonly owned by law-abiding citizens for lawful purposes. This would certainly include semi-automatic rifles.

There are tens of millions of so-called assault weapons owned by tens of millions of law-abiding Americans who have not and will never use them for unlawful purposes. Not only does this mean these firearms qualify for protection as valuable means of self-defense against crime, but on a deeper level they embody the most fundamental purpose of the Second Amendment—the security of a free state.

As renowned Supreme Court Justice Joseph Story knew, the right to keep and bear arms is the palladium of the liberties of a republic; since it offers a strong moral check against the usurpation and arbitrary powers of rulers.”

Semi-automatic rifles are precisely the types of arms that would be used in militia service, should the people need to defend their liberties against either internal tyranny or external threat.

Anyone who has witnessed the chaotic scenes from Venezuela of unarmed protesters being run over by tanks and helplessly terrorized by armed pro-Maduro gangs should innately understand the importance of a free people being meaningfully armed for the defense of their liberties.

The worst part about Booker’s plan is that it doesn’t actually address real problems, and therefore would not be effective at lowering rates of gun-related violence.

We already know that most gun-related crime is committed by individuals who are already prohibited from owning firearms and obtained guns through illegal channels. When would-be criminals do go through official legal channels, they do so because they don’t have disqualifying criminal or mental health histories and know they will pass a background check.

Targeting law-abiding citizens with more restrictions and additional burdens on the exercise of a constitutional right does nothing to stop the very people who already ignore existing laws. It’s the equivalent of suggesting that we can stop people from driving cars without a valid license if we would just make it harder to get a valid driver’s license in the first place.

Similarly, targeting semi-automatic rifles is an inane way of combating gun-related violence because these types of firearms account for only a miniscule percentage of gun deaths every year. They are statistically the firearm least likely to be used in violent crime or gun-related deaths, and account for far fewer deaths every year than even knives or blunt objects.

The same reasoning holds true for factory-standard magazines capable of holding more than 10 rounds. Suicides account for over two-thirds of annual firearm-related deaths, meaning that right off the bat most gun deaths are not in any way related to the number of rounds in a magazine. Additionally, studies already have shown that the use of “high-capacity magazines” has no statistically significant effect on the lethality of mass public shootings.

If Booker is serious about reducing rates of gun violence, he must be willing to address the much more complicated problems underlying gun deaths in the United States.

First, we must address the role that untreated serious mental illness plays in both suicides and mass public shootings.

This mostly should take place on the state and local level through better reporting of disqualifying histories to the National Instant Criminal Background Check System, or NICS; more effective use of state mental health frameworks; and maintaining adequate numbers of public psychiatric beds of last resort.

States also should seriously consider imposing red flag laws, which—when well-crafted—enable the temporary disarmament of people in the midst of or on the verge of a mental health crisis without broadly imposing burdens on the constitutional rights of people who are not a risk of danger to themselves or others.

Second, both federal and state governments must do a better job of cracking down on the illegal firearms market.

Third, a majority of firearm-related homicides are related to urban drug and gang violence and can be most effectively addressed through comprehensive efforts to revitalize these communities.

Blaming guns and imposing serious burdens on law-abiding gun owners most uniquely hurts these vulnerable communities by inhibiting the ability of those who live there to defend themselves from crime while also failing to solve the underlying problems, such as lack of educational and economic opportunities.

But like many politicians, it doesn’t appear that Booker is serious about finding effective and constitutional ways of saving lives. He would rather snub his nose at the American scheme of ordered liberty and demonize law-abiding gun owners than look honestly at the situation and admit its complexity.

That’s not just bad public policy. It’s a threat to a free people that underscores why the Second Amendment exists in the first place.