The Role of Mental Illness in Mass Shootings, Suicides 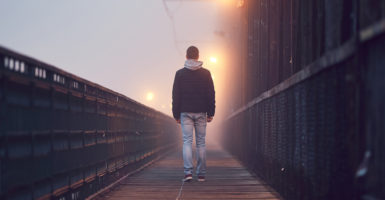 The majority of all mass public killers likely suffered from a serious mental illness prior to their attacks. (Photo: Jaromir Chalabala/EyeEm/Getty Images)

This week marks the one-year anniversary of the horrific Parkland school shooting. That tragedy sparked an intense national debate over how best to protect our children from school shootings.

Some have pushed for more restrictions on the constitutional rights of law-abiding citizens. Among them are the American Federation of Teachers and the National Education Association. These groups released a new set of proposals on Monday that they say “can prevent mass shooting incidents and help end gun violence in American schools.”

Unfortunately, these proposals miss the mark by neglecting to focus on the real problems, including, among other things, the role of mental illness in certain types of firearm-related violence.

How does serious mental illness factor in? And what steps can government take to mitigate the role of untreated mental illness in producing violent threats?

For that reason, The Heritage Foundation recently published a legal memorandum, “Mental Illness, Firearms, and Violence,” as part of a series of papers by John Malcolm and myself exploring some of these deeper issues.

The paper makes clear that, while most mentally ill individuals are not and never will become violent, certain types of serious mental illness—especially when untreated—are associated with a higher prevalence of certain types of firearm-related violence.

In particular, individuals with serious mental illness are at a greater risk of committing suicide and are responsible for a disproportionate number of mass public killings.

There’s no evidence that all mentally ill people constitute a “high risk” population with respect to interpersonal violence, including firearm-related violence against others.

In fact, most studies indicate that mental illness is responsible for only a small fraction (about 3 percent to 5 percent) of all violent crimes committed in the United States every year, and most of those episodes of violence are committed by individuals who are not currently receiving mental health treatment.

There is, however, a strong connection between acts of mass public violence—including mass public shootings—and untreated serious mental illness.

While acts of mass public violence are extraordinary and rare occurrences, they are often high-profile events that deeply affect the national view of violent crime trends. Mass public shootings in particular stoke national conversations on gun violence and gun control, for understandable reasons.

The majority of all mass public killers (some studies estimate as many as two-thirds) likely suffered from a serious mental illness prior to their attacks, and often displayed clear signs of delusional thinking, paranoia, or irrational feelings of oppression associated with conditions such as schizophrenia and bipolar-related psychosis.

This includes many individuals who committed atrocious attacks on students, including the Parkland shooter, the Virginia Tech shooter, and the Sandy Hook shooter—all of whom had long histories of untreated mental health problems.

Unfortunately, hardly any of these individuals were receiving psychiatric treatment at the time of their attacks.

Even without access to firearms, individuals with untreated serious mental illness can and do find ways to commit mass public killings.

Activist groups and politicians who point to mass public shootings as a reason for broad restrictions on firearm access by the general public largely miss the underlying reality: The real problem is not the prevalence of firearms among the general public, but the prevalence of untreated serious mental illness that causes some individuals to become violent in catastrophic ways, regardless of lawful access to firearms.

The most significant link between mental illness and firearm-related violence is suicide, which accounts for almost two-thirds of all annual firearm-related deaths in the United States.

Of course, not every suicide is necessarily related to an underlying mental illness, but there is little doubt that the presence of a mental illness substantially increases a person’s risk for committing suicide.

The most common method of suicide in the U.S. is through the use of a firearm, an unsurprising reality given that the U.S. has the highest per-capita number of privately owned firearms in the world.

Despite the nation’s exceptionally high rate of suicide by firearm, however, it does not have a particularly high overall suicide rate, compared with other countries.

Our national suicide rate stands at roughly the world average and is comparable to the rate experienced by many European countries with significantly lower rates of private firearm ownership.

At the same time, a number of countries with severely restrictive gun control laws have much higher rates of suicide than the United States, including Belgium, Finland, France, Japan, and South Korea.

The connection between general measures of firearm access and general suicide rates is limited, at best. The U.S. suicide rate has remained relatively stable over the past 50 years, even though the number of guns per capita has doubled.

Moreover, the percentage of suicides committed with firearms has actually decreased since 1999, even though the number of privately owned firearms has increased by more than 100 million.

As this data suggests, broad restrictions on firearm access are unlikely to have a meaningful effect on general suicide rates, and there are other socioeconomic factors beyond firearm availability that better account for differences in suicide rates.

These factors largely include measures of “social cohesion,” such as divorce rates, unemployment, poverty, past trauma, and family structure, and it’s increasingly clear that more socially integrated communities also tend to have lower suicide rates.

But it’s also more complicated: While individuals with serious mental illness may have an increased risk of committing suicide when they have ready access to firearms, they may also be less likely than the general population to commit suicide with firearms.

Why? Because they often have greater barriers to legal firearm access, including disqualifying mental health histories under state or federal law, and concerned friends or family members who may limit their unsupervised access to firearms.

Several studies suggest, then, that reducing unsupervised access to all commonly employed means of suicide (including firearms, but also sharp objects, medications, and rope material) for at-risk persons reduces their individual risk of suicide.

In short, broad limitations on firearm access for individuals who are not necessarily at heightened risk for committing suicide are unlikely to meaningfully affect overall suicide rates and should be viewed with a heavy dose of skepticism, but policies designed to limit firearm access for individuals with serious mental illness may be an important step in the right direction for reducing state and national suicide rates.

It is clear that mental illness—especially untreated serious mental illness—plays a significant role in certain types of firearm-related violence that cannot be ignored.

This is not to suggest that individuals with mental illness should be treated as community pariahs or that they are even the cause of most firearm-related violence in the United States. But any holistic approach to reducing suicide and violent crime rates in our communities must account for the role played by serious mental illness.

The reduction of suicide rates requires a comprehensive approach that addresses all of the various factors related to suicide risk, including mental illness, socioeconomic variations, and access to a support system.

Similarly, policies to reduce the rate of mass public shootings in the United States must account for the significant role played by untreated serious mental illness in such killings.

The broad-scale disarmament of the general population is an inappropriate and unnecessary substitute for dealing with the underlying problems.

>>> 2 of 3: How Mass Deinstitutionalization Harmed the Mentally Ill