We Don’t Need a Sweeping Overhaul of Gun Laws 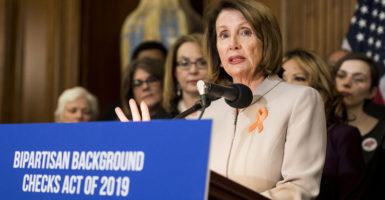 On Valentine’s Day one year ago, a young man with a gun left 17 dead at a high school in Parkland, Florida. Since then, as part of its School Safety Initiative, The Heritage Foundation has taken on the task of finding real solutions to the complex issue of firearm-related violence.

That’s also why my colleague John Malcolm and I authored a Heritage legal memo, “The Current State of Laws Regarding Mental Illness and Guns.” In it, we evaluate existing laws designed to keep guns out of the hands of certain at-risk individuals and explore promising avenues for strengthening those laws without neglecting due process protections.

Our new legal memo shows that, despite some well-publicized claims to the contrary, numerous state and federal laws already restrict firearm access for mentally ill individuals.

The more pressing concern is that society too often underuses the mechanisms already in place to prevent people suffering from mental illness from possessing guns if they pose a danger to themselves or others.

On the whole, federal prohibitions on possession of firearms by the mentally ill correctly focus on individualized determinations of dangerousness, and not on the broader category of diagnosis alone.

This is consistent with both the Second Amendment’s protection of a fundamental right and a recognition that the existence of a mental illness in and of itself does not mean a person poses a heightened risk of future violence.

The Gun Control Act of 1968 prohibits the purchase or possession of firearms by people who have been formally and involuntarily committed to mental health or drug treatment by a court, mental health board, or other legal commission.

In 1993, Congress established the National Instant Criminal Background Check System (the NICS index), which is essentially a database of criminal and mental health records that disqualify a person from legally purchasing or possessing a firearm. All gun dealers who are federal firearms licensees are required to request background checks through the NICS index on all prospective firearm purchasers, and must decline firearm transfers to individuals who fail the check.

In this way, federal law provides a baseline for prohibitions on firearm access by the mentally ill. But several states have expanded the scope of these prohibitions in overly broad ways that incorrectly focus on diagnosis alone, instead of dangerousness. Even worse, some states do not provide any mechanism for individuals to have their Second Amendment rights restored.

Against the recommendation of the American Psychiatric Association, states such as Connecticut and Maryland have expanded prohibitions to include individuals who voluntarily seek inpatient treatment for mental health problems. These laws could dissuade people who are cognizant of their deteriorating mental states from seeking necessary treatment.

Even more concerning is the state of New York’s Secure Ammunition and Firearms Enforcement Act, known as SAFE. The 2013 law requires medical practitioners—including those who don’t specialize in mental health—to file reports on any person whom they believe is at risk of harming himself or others.

The reported person is then placed on a “no-buy” database for five years and reported to the NICS index as having a disqualifying mental health record. If the person is already a gun owner, his or her firearm permit is revoked and the firearms confiscated.

At no point in New York’s process is the person entitled to notice of the report, given an evidentiary hearing or legal representation, or otherwise provided with the slightest semblance of due process.

Within one year of the law’s enactment, tens of thousands of New York residents had their Second Amendment rights completely stripped, and many may not even be aware they have lost their rights.

Similarly concerning, Hawaii maintains a broad and highly questionable prohibition on the possession of firearms by any person diagnosed with a mental health disorder. This focus on diagnosis alone, instead of dangerousness, unfairly demonizes individuals who aren’t likely to become violent.

Moving forward, states should implement constitutionally sound and effective intervention policies to strengthen their ability to keep guns away from individuals who pose a heightened risk of committing a violent act as a result of mental illness. These policies should focus on temporary disarmament based on definable risks of violence in the near future, on providing adequate treatment, and on respecting due process rights.

First, states should promptly share all relevant mental health records with the NICS index, including records that restore Second Amendment rights. The index is dependent on states’ voluntarily submitting records to the FBI, as the Supreme Court has held that the federal government can’t “commandeer” state action in this regard. Unfortunately, many states have been unwilling to promptly disclose pertinent records.

The NICS index, however, likely is missing millions of disqualifying histories. More records submitted to the index mean that fewer disqualified individuals will be allowed, wrongfully, to purchase firearms through legal channels.

Second, states should impose only narrowly targeted restrictions that focus on identifiable risks of future violence, but that also respect due process. Gun violence restraining orders, also known as “red flag laws,” have been implemented by 14 states and provide a promising framework.

The specifics vary by state, but all these measures are based on the general premise that law enforcement officers (and in some states, family members) may petition courts to issue search warrants to temporarily seize firearms from individuals who present a likely risk of harm to themselves or others in the near future.

These search warrants must be based on sworn affidavits explaining why the individual is a likely risk of future harm, whether due to a diagnosed mental illness, emotionally unstable conduct, or other recent violent behaviors.

Once firearms are seized, the state has only a limited time frame—typically no more than two weeks—before it must hold a full evidentiary hearing that gives the person the full array of due process protections.

If the state can’t prove its case by clear and convincing evidence, the firearms must be returned. The orders expire after a set time frame (usually six months to one year) and the individual may petition the court to show that he or she is no longer dangerous and should have the firearms returned before the expiration date.

Importantly, studies evaluating how states actually use gun violence restraining orders have found that these laws can be fairly effective at temporarily disarming potentially dangerous individuals who otherwise would have flown under the radar of the mental health system.

The laws also could have been used to prevent numerous mass public shootings, including last year’s attack at Marjory Stoneman Douglas High School in Parkland.

In addition, the built-in due process mechanisms are quite effective at protecting against abuse or misuse by public officials or vindictive family members. In practice, officials use the warrants to target a small number of people who most clearly present an acute danger to themselves or others.

Gun violence restraining orders have a clear preventative value. They allow the quick, temporary disarmament of individuals who are at a heightened risk of violence but who do not necessarily meet the requirements of involuntary civil commitment, or who may commit violent acts before the civil commitment process can run its course.

The restraining orders also do not result in the severe and lifelong consequences that come with involuntary civil commitments.

The U.S. doesn’t need to tear down its existing framework, repeal the Second Amendment, or otherwise impose drastic burdens on the fundamental rights of law-abiding Americans to keep firearms away from dangerous people.

When gun control advocates sell the notion that we need a radical and sweeping overhaul of gun laws, we shouldn’t be buying it.

>>> 2 of 3: How Mass Deinstitutionalization Harmed the Mentally Ill