Would-Be Builder of Border Wall Ready to Do ‘Impossible’ 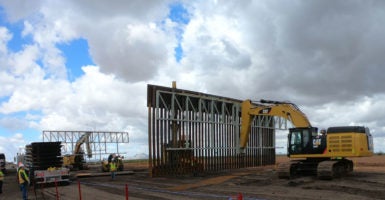 COOLIDGE, Arizona—The vice president of a family-owned construction company says his firm is competing for one of the nation’s most talked-about contracts because its leaders believe they can do what many say can’t be done.

“Two years ago, when the president said he wanted to build a wall [from] sea to sea … many people said, ‘It cannot be built, it won’t be built,’” Grant Fisher, vice president of Fisher Industries, told The Daily Signal in an interview.

But “build the impossible,” Fisher said, is “what we do.”

Fisher said his company’s $3.3 billion proposal to the Department of Homeland Security is to construct 218 miles of border fence, plus roads and related technology, by June 2020. The work would be in 11 sectors, ranging from 2 miles near Tucson, Arizona, to 46 miles near El Paso, Texas, according to the proposal.

The fence would use bollards, which are upright steel posts usually placed along roads and parking lots to block or control traffic.

Fisher said his family’s company, established in the ’60s, found a solution allowing construction of a mile of steel fence per day along the southern border.

“This system includes the physical barrier, but it also includes infrastructure for the [Border Patrol] agents,” Fisher said.

“It includes a concrete paved roadway, as well as a full electrical package for the agents to use. And, on top of that, it includes [border detection] technology. So I think it’s a true system that both Democrats and Republicans can get behind.”

Parent company Fisher Sand & Gravel was founded in southwestern North Dakota over 60 years ago. In 1998, Tommy Fisher, the current president and Grant Fisher’s father, expanded operations to Arizona and the southwestern United States.

Grant Fisher said he’s not interested in discussing the politics or ethics of the border wall, but said his company is trying to fill a need that President Donald Trump says is critical.

“I hear stories of the angel moms and people like that that are heavily affected,” Fisher said, referring to parents whose children have been killed by illegal immigrants.

“I’m not going to get too into the ethics of the wall,” he said. “I just know if it’s a national emergency and the president declared it, we’re the ones to step up to the plate and actually get it done.”

“What makes our system more superior is the way we install it,” Fisher said. “We’re using a … excavator to basically hang the bollard.”

Rather than the usual practice of bracing the steel bollards with a system along a trench, which he said could cause a cave-in, the Fisher Industries method is to “hang” the bollard fencing with an excavator.

“When you hang it, we use gravity as our friend, and it’s perfectly straight along the trench, and there’s no passive pressure alongside both edges of the trench,” Fisher said. “That’s how we can guarantee [to complete] a mile a day.”

Fisher said his company sees the potential opportunity as like the Super Bowl.

“Fisher likes building the unbuildable, and we can’t wait till we get the opportunity to step on a national stage,” he said. “This is our Super Bowl; we’re ready to perform.”