Much of Border Wall Fight About Trump Resistance, Not Border Security 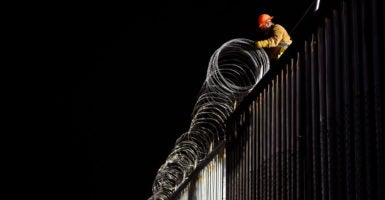 Workers reinforce the security on the U.S. side of the border fence with Mexico, Nov. 15, 2018. (Photo: Alfredo Estrella/AFP/Getty Images)

Remember his earlier call for a “Muslim travel ban”? The policy itself—temporary restrictions on travel from a half-dozen countries—was perfectly reasonable. As the ISIS caliphate collapsed, its fighters began fleeing to those nations, and Trump wanted to have measures in place to make sure they did not then come here.

Yet the president’s rhetoric helped fuel a bitter, partisan debate, which kept the policy in abeyance until a Supreme Court ruling restored common sense by upholding the ban.

His call for more border wall has sparked a similar dynamic. The political rhetoric on both sides of the debate frequently flies over the top, obscuring the practical rationale for the policy.

Border security needs have changed since Congress passed the Secure Fence Act of 2006. Then, Homeland Security’s focus was to catch illegal border crossers and remove them before they “melted” into the interior.

The fencing was both an effective deterrent and a helpful enforcement tool, increasing the likelihood of expedited removal. As a result, illegal crossings declined.

But the threat to the border has evolved. Those crossing the border with children and claiming to be related as well as those claiming refugee status are not put in expedited removal. Both have become popular tactics to “beat” the system.

The only way to prevent abuse of the asylum process is to keep would-be immigrants on the other side of the border until 1) they submit formal asylum claims at official points of entry and 2) those claims have been evaluated.

A similar request from any other president would be considered unremarkable. It’s controversial only because of the hyperpartisan, emotional political atmosphere that has characterized the Trump era.

Conversely, other arguments against the request don’t pass the common sense test.

One argument is that the border is not a problem. The real problem, they say, is visa overstays—people entering legally and then just not leaving.

Overstays have always been a huge problem and do, in fact, account for a large percentage of people here illegally. But part of the reason overstays are a larger share of the population is because border security is working better than it used to. And we should continue to make it work better.

One reason to worry more about border crossers than overstayers is because the latter at least got a visa to come here to begin with. That means they were screened for security, public safety, health, criminal, and public charge risks. Those crossing illegally haven’t been screened at all—making them a potentially higher-risk population.

At the end of the day, illegal border crossings and overstays are both problems. It’s not an either/or issue; good policy must address both.

Another weak argument suggests walls aren’t needed because drugs and other bad stuff are mostly smuggled through the ports of entry. There is truth in that, but smuggling also occurs elsewhere along the border. Again, good policy must address both dangers.

We actually need more border security to channel more smuggling attempts to ports of entry, because that is where we are best equipped to screen for bad things.

Perhaps the weakest argument against border walls is that they create a humanitarian crisis. Right now, legitimate refugees suffer because their cases are delayed due to the avalanche of false claims now clogging the system. Moreover, to take advantage of the “family” loophole, more and more children are being dragged to the border—often by a non-family member. This has created an epidemic of child endangerment.

Finally, wall opponents argue there are other things we should do to crack down on illegal immigration—from closing catch-and-release loopholes in the wall, to working with Latin American countries to stem the causes of illegal migration and combat criminal cartels.

Here, they are right. The administration should take all those steps. And it’s trying to do so. But the package proposed by the president complements these efforts. It is not one or the other.