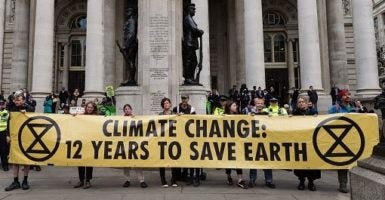 Environmental activists with the group Extinction Rebellion demonstrate outside the Bank of England in London on April 25, the 11th day of protests demanding that the financial industry declare a climate and ecological emergency. (Photo: Wiktor Szymanowicz /Barcroft Media/Getty Images)

The Democrat-controlled House is set to vote this week on a measure to keep the United States in the Obama-era Paris climate agreement, from which President Donald Trump withdrew in June 2017, within six months of becoming president.

HR 9, the Climate Action Now Act, would block federal funds from being used to exit the agreement that the Obama administration had a major hand in crafting. The bill is sponsored by Rep. Kathy Castor, D-Fla., chairwoman of the House Select Committee on the Climate Crisis.

But another member of the select committee, Rep. Carol Miller, R-W.Va., proposes an amendment on the basis that the Paris Agreement harms the economy of her coal-producing state, The Daily Signal has confirmed.

Miller’s amendment to the Castor bill highlights the shortfalls of the United Nations accord to fight climate change,  noting it does not account for the United States’ abundance of natural resources and the hundreds of thousands of Americans employed by the fossil fuels industry.

The amendment also expresses support for affordable, reliable energy, including coal, and its importance to the U.S. economy and national security.

Miller’s amendment is unlikely to pass, just as the Castor bill itself likely will die even if the House OKs it, because Republicans control the Senate. But the legislative battle indicates how House Democrats have prioritized climate change as an issue.

Because full U.S. withdrawal from the Paris Agreement won’t be complete until 2020, the Castor bill seeks to block federal funds from being used to achieve the exit.

“It was with America’s leadership and engagement that so many nations committed to climate action in the international Paris Agreement,” Castor said in a public statement. “Despite what President Trump has said, America cannot and will not retreat. We will keep our commitments to fight the climate crisis.”

Most Republicans are likely to oppose the measure.

“I voted against it in [the Energy and Commerce] Committee and I’ll vote against it on the floor,” Rep. Buddy Carter, R-Ga., also a member of the select climate committee, told The Daily Signal in an interview.

“This bill doesn’t get to the root of the problem,” Carter said. “It would never pass the Senate and if by some miracle it did, President Trump would veto it. It’s just a show on behalf of the majority.”

The 2015 Paris climate agreement involved international commitments to limit carbon emissions and slow the increasing temperature of the earth. President Barack Obama entered the agreement without getting Senate approval of the pact as a treaty.

The commitments included reducing U.S. greenhouse gas emissions by 26 to 28% by 2025, or to 2005 levels. But the agreement didn’t impose the same goals on other big polluter countries such as China and India.

Under the Paris Agreement, the U.S. could lose 400,000 jobs by 2035, according to an analysis by The Heritage Foundation. The analysis also estimated total income loss of more than $20,000 for the average family of four and an aggregate loss of $2.5 trillion to the gross domestic product.

“While the climate is indeed changing and human activity is playing a role, the chances of looming climate catastrophe are simply unrealistic and not grounded in reality,” Nicolas Loris, an economist who studies energy and environmental issues at The Heritage Foundation, wrote in a recent commentary for The Daily Signal.

“But even granting such a looming catastrophe, the Paris Agreement itself would do little to alter the climate. To have any impact whatsoever on climate, the entire world would either have to quickly change the way it consumes energy or simply remain undeveloped. Both options are devoid of reality.”

Those who are clamoring for action on climate change are the ones who should actually be most upset with what a sham the Paris agreement is. It’s been celebrated as a breakthrough achievement of the world’s developed and developing countries coming together, but it is anything but that.

With no enforcement mechanisms in place and no repercussions for failing to meet emissions reduction targets, countries are essentially free to do whatever they want, meaning they will continue on their business-as-usual trajectory without making any changes. China, for instance, can peak its emissions in 2030 even though projections have their peak emissions falling before that year.

“The Democrats want to lock us into a bad deal that is failing even as the House considers HR 9,” Griffith told The Daily Signal in a written statement, adding:

Europe is having trouble living up to its commitments under the agreement. Other countries such as China are allowed under its terms to continue polluting heavily, and in some cases even increase their carbon output. The United States should lead the way on climate solutions, not be tied down by this flawed agreement.