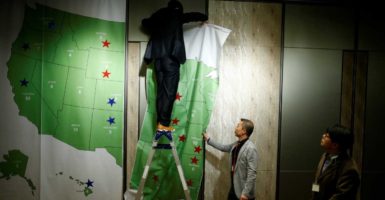 Nearly a month after Donald Trump defeated Hillary Clinton in this year’s presidential election, progressive groups and activists are attempting to undermine the result along with fundamental institutions created by the Founding Fathers.

Clinton appears to have won the national popular vote in 2016, primarily fueled by massive landslides in populous Democratic states like California and New York. This has sparked efforts to do away with the state-based and not entirely democratic Electoral College.

Though a huge part of the anti-Electoral College push is sour grapes in the wake of a surprise electoral defeat, it serves the broader interest of the progressive movement’s goal to both delegitimize the incoming administration and subvert the idea of federalism as enshrined in the Constitution.

The Electoral College was carefully designed by the Founders after lengthy deliberation at the 1787 Constitutional Convention. The design is this: Americans don’t cast their vote for president, but instead for electors pledged to their preferred candidate. Each state has a set number of electors based on the total number of representatives and senators. You can read about why the Founders created this seemingly complex system here.

Founding Father Alexander Hamilton, who was fairly popular with progressives just a week ago, supported the Electoral College process in Federalist 68. He said that “if the manner of it be not perfect, it is at least excellent.”

But a number of prominent Democrats have ignored Hamilton and called for an end to the Electoral College post-election.

Opponents of the Electoral College claim that the institution is fundamentally flawed. The fact that the winner of the most recent presidential contest didn’t have the highest total vote further demonstrates why it needs to be scrapped, according to their logic.

This narrative couldn’t be farther from the truth, as the issues surrounding the election prove exactly why the Electoral College is such an excellent system for the United States.

For instance, Green Party presidential candidate Jill Stein is leading a movement to recount votes in three key states that Trump won: Wisconsin, Michigan, and Pennsylvania. This was in part justified by the idea that Russia had tampered with the election.

The recount process will likely be messy, but it would be vastly more complicated if America had to undergo a national as opposed to state-level recount. Votes have trickled in for the last month, and it is possible that without the state-based system it might still be unclear who the next president would be.

As ugly as the 2016 election was, it would have been far uglier without the moderating, stable process afforded by the Electoral College.

Having states conduct their own elections is a strength of our system, not a weakness. For instance, without the Electoral College and respect for state powers, it would be difficult for America to experiment with solutions to prevent voter fraud. This should be a priority for those suddenly concerned about voting integrity.

What is lost in the Electoral College debate is the underlying attack on America’s cherished and inherited idea of federalism.

The Founders in their wisdom designed this republic with the intent of checking ambition with ambition, and delegating specific powers to both the national as well as state governments. They created a nation in which states could operate independently, experimenting with different policies and laws to fit their people.

The elimination of the Electoral College would be just another blow to the role of the states in the American system of government. No longer would presidential candidates have to appeal to the farmers of rural Iowa alongside the bankers of urban New York. They would be incentivized to campaign directly to the interests of the largest population centers alone.

The reasoning used to abolish the Electoral College could easily be applied to some of the most important aspects of America’s constitutional republic.

If the Electoral College is simply an ancient, undemocratic, and defunct relic of the Founding, then why isn’t the Senate? After all, treating the states equally and allowing them only two senators regardless of population is silly if one thinks the states hold no special place in our system. One writer was open about this in a Washington Post op-ed calling for abolishing the states entirely.

“Times have changed, and we need to rethink the notion of the ‘United States of America,’” Lawrence R. Samuel wrote in The Washington Post. “Our states are no longer culturally diverse regions with their own respective identities; rather, they are artificially constructed geographic entities that certainly would not be formed today.”

A federation of states was a wonderful idea in the late 18th century, but represents an unnecessary and costly burden in the early 21st. Two layers of government—federal and local—offers a cleaner, more sensible, and much more affordable system than our current one …

This is the essential issue at the heart of the Electoral College that extends far beyond the results of a single election.

The left wants to fundamentally change the system of federalism so venerated and protected by the founding generation. But those who believe that the United States was built on timeless ideas about man’s relation to man should look to preserve the system that allowed America to rise to the status of a superpower while preserving individual liberty.