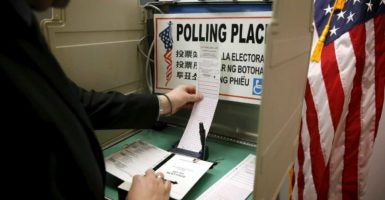 As Election Day looms large, Americans are as divided as ever on the future direction of the country and many of our most pressing issues.

One issue that ought to unite the country, however, is the need for election integrity. After all, it is through the ballot box that voters will select our local, state, and federal leaders. It is imperative that the vote accurately reflects the will of our citizens.

Many on the left, however, are unconcerned with the protection of each individual’s vote. They quickly dismiss voter fraud as a myth meant to justify voter suppression. Perhaps progressives are so quick to kill the debate because they know that the facts are not on their side.

Indeed, voter fraud is a very real and ongoing threat to the integrity of the political process, and The Heritage Foundation’s “Does Your Vote Count” project tracks this “nonexistent” problem. Today, we are adding 16 new confirmed convictions for voter fraud to our voter fraud database. That brings the count to over 430 criminal convictions for election fraud.

The Heritage database is by no means reflective of the true scale of voter fraud in the country. Obtaining convictions for election fraud is no easy task because many states lack the procedural tools needed to detect fraud, either before or after it has occurred. Often these cases are given a low priority by overburdened prosecutors, especially after an election is over. In short, voter fraud often goes undiscovered.

Below is a sampling of the new entries:

District Judge Rex Burlison determined that a sufficient number of improper absentee ballots had been cast to change the results of the election, and ordered a second election. Franks won the redo by a margin of 1,533 votes.

Pasco Parker, a 63-year-old Tennessee resident, admitted to voting in three states during the 2012 federal election. He mailed in an absentee ballot to both Florida and North Carolina, and he voted in person in Tennessee.

Parker pleaded guilty to felony voting fraud and felony voter registration. He received a prison sentence of six to 17 months, and was ordered to complete 48 hours of community service. His prison time was later suspended in favor of 24 months of supervised probation.

Parker’s case speaks to the need for states to adopt policies meant to make it easier to identify duplicate voting and ensure those who do so are brought to justice. Most current state policies are inadequate; indeed, Parker’s fraud may well have gone undetected were it not for the investigatory efforts of a North Carolina volunteer voting watchdog group, the Voter Integrity Project.

An accomplice, Scotty L. McCarty, was also charged, but pleaded guilty to a misdemeanor and ultimately testified against the others.

McCarty revealed that the group had participated in vote buying conspiracies in several elections dating back to 2010. He testified that Shepherd contributed $10,000 and Tami Jo Risner contributed $2,000 to the vote buying operation, paying individuals $50 apiece to vote for their slate of candidates.

Shepherd also revealed that in a 2010 election, while acting as a precinct officer, he added 60 votes to the total for a candidate and Tami Jo Risner signed the names of those who hadn’t voted to cover the discrepancy.

The Magoffin fraudsters will be sentenced in December. They each face a potential five-year prison sentence.

The right to vote is essential to the American system of government. Consequently, election integrity must be preserved to ensure that every legitimate vote counts, and that our elections accurately reflect the will of the citizenry. But before government at all levels can remedy the problem of voter fraud, politicians must first acknowledge that it exists.

Heritage’s report, “Does Your Vote Count,” discusses the history of, reasons for, and myths about voter fraud. It also suggests practical, commonsense changes that will both protect American elections while encouraging all eligible voters to register and cast their ballots.

As shown in the Missouri 78th House District case, and many other cases in our database, voter fraud can drastically influence the outcome of elections and usurp the will of the people. It’s a serious problem that deserves a serious solution.