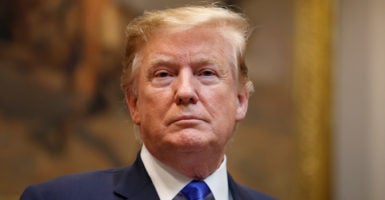 President Donald Trump vetoed a bill from Congress that would have withdrawn U.S. support from the Saudi-led Arab coalition in Yemen. (Photo: Tom Brenner/Stringer/Getty Images)

President Donald Trump rebuffed congressional efforts to withdraw U.S. support from the war in Yemen on Tuesday, vetoing a bill that would have forced the U.S. to cease support for the Saudi-led Arab coalition fighting against Iran-backed Houthi rebels.

In his veto statement, Trump explained:

This resolution is an unnecessary, dangerous attempt to weaken my constitutional authorities, endangering the lives of American citizens and brave service members, both today and in the future.

Trump clearly had strong legal, constitutional, and policy reasons for exercising his veto.

For starters, his statement challenged the use of the War Powers Act as a basis for the legislation, S.J. Res. 7, because U.S. military forces were not directly engaged in hostilities in Yemen apart from occasional military operations against al-Qaeda and associated forces, which were explicitly exempted from the legislation. As the president said:

This joint resolution is unnecessary because, apart from counterterrorism operations against al-Qaeda in the Arabian Peninsula and ISIS, the United States is not engaged in hostilities in or affecting Yemen.

Trump also sought to protect his constitutional authority as commander-in-chief of the armed forces, as have many past presidents confronted with war powers challenges. His veto statement declared:

S.J. Res. 7 is also dangerous. The Congress should not seek to prohibit certain tactical operations, such as in-flight refueling, or require military engagements to adhere to arbitrary timelines. Doing so would interfere with the president’s constitutional authority as commander-in-chief of the armed forces, and could endanger our service members by impairing their ability to efficiently and effectively conduct military engagements and to withdraw in an orderly manner at the appropriate time.

A Blunt Instrument That Rewards Iran

Trump’s veto is also strongly justified on policy grounds. The Yemen war resolution from Congress is a blunt instrument that could have inflicted severe collateral damage on a range of U.S. national interests in the Middle East.

It would have resulted in abandoning allies that are fighting in Yemen to defend themselves and to restore the internationally recognized government of Yemen, which was ousted by Iran-backed Houthi rebels in 2015 in a bloody coup that violated a U.N.-brokered ceasefire.

The Trump administration has already stopped the aerial refueling of Saudi warplanes involved in the Yemen conflict and called for a negotiated settlement. But the United States cannot afford to desert its allies and hope for the best. Undermining the Yemeni government and the Saudi-led coalition would make U.N.-brokered efforts to reach an acceptable political settlement much more difficult.

It is no secret that many in Congress saw the vote as a means of punishing the Saudi government for its involvement in the death of Jamal Khashoggi last October. But the measure would have punished not just Saudi Arabia, but also the government of Yemen, and other countries fighting against the Houthis in the Saudi-led coalition: the United Arab Emirates, Bahrain, Kuwait, Egypt, Jordan, Morocco, Senegal, and Sudan.

An end to U.S. support would also benefit Iran, the Houthis’ chief source of support. Iran has sought to transform the Houthi Ansar Allah movement into the “Hezbollah of Yemen”—a permanent threat to regional stability and security that directly conflicts with U.S. interests.

Iran has illegally transferred sophisticated ballistic missiles, drones, and remote-controlled boat bombs to the Houthis, who have used them to target cities, airports, and other civilian targets in Saudi Arabia and the United Arab Emirates.

Given the potential consequences of the U.S. abandoning its allies, it’s no wonder the Pentagon and State Department strongly pushed for continued support for the Saudi-led coalition.

Congress lacks the votes to override Trump’s veto, so his policy will stand. The House approved the measure earlier this month by a vote of 247-175, and the Senate voted last month to approve it 54-46.

Nonetheless, the Trump administration must remain on guard against the same damaging restrictions being repackaged in future legislation.

Chaos Will Erupt in the Middle East If U.S. Leaves YemenU.S. Should Encourage a Settlement in Yemen to Defeat Al-Qaeda and Contain Iran