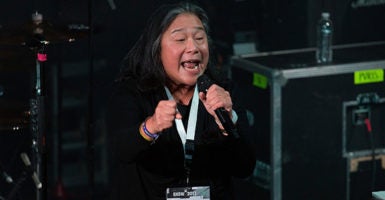 Tina Tchen, seen here giving a speech in March 2017 in Austin, Texas, has been hired by the Southern Poverty Law Center for a "top-to-bottom external review" of its "workplace culture." (Photo: Rick Kern/Getty Images)

The onetime chief of staff to former first lady Michelle Obama is leading an internal investigation into the Southern Poverty Law Center’s alleged workplace misconduct that led to the exit of its top two officials.

Tina Tchen, a prominent lawyer in Chicago, has also found herself in the middle of the controversy surrounding “Empire” actor Jussie Smollett, who was indicted for faking a hate crime before state prosecutors dropped the charges without offering a full explanation.

Morris Dees, the co-founder of the SPLC, stepped down from the organization amid vague charges of discrimination. SPLC President Richard Cohen wasn’t accused of wrongdoing, but also resigned “to give the organization the best chance to heal.” The organization was reportedly fending off a staff revolt.

The SPLC is a liberal activist legal group that regularly labels organizations and individuals that it disagrees with as “hate groups.”

In a message to supporters, Bryan Fair, chairman of the SPLC’s board, said Tchen will help the organization deal with its problems.

“Right now, as you may have read, we’re facing some internal workplace challenges. But we’re meeting them in the same way that we’re meeting every other challenge that we face—with a fierce commitment to do justice,” Fair said in the message.

“We’ve just launched an initiative with Tina Tchen—a former chief of staff for Michelle Obama and one of the leading voices behind the Time’s Up Legal Defense Fund—to advise us on workplace culture issues.

“Everyone who works at the SPLC deserves a workplace that reflects our highest values, and we’re committed to making sure that it happens,” Fair said.

The SPLC did not respond to inquiries from The Daily Signal for this article.

Tchen was tasked with conducting a “top-to-bottom external review of our workplace culture and our past practices and policies,” Fair said.

Here are key points to know about Tchen.

Tchen reportedly helped connect Smollett’s family with Cook County State’s Attorney Kim Foxx in Chicago after the actor reported what he said was a hate crime.

That was several weeks before the grand jury indicted Smollett for allegedly faking the supposed hate crime, in which he said his attackers shouted racist and anti-gay slurs at him.

After the indictment, Cook County prosecutors dropped the 16 felony charges against Smollett related to the allegedly phony report.

Tchen said her contact with prosecutors was not intended to sway them.

“I know members of the Smollett family based on prior work together,” Tchen said in a statement, according to CNN. “Shortly after Mr. Smollett reported he was attacked, as a family friend, I contacted Cook County State’s Attorney Kim Foxx, who I also know from prior work together.

“My sole activity was to put the chief prosecutor in the case in touch with an alleged victim’s family, who had concerns about how the investigation was being characterized in public.”

Public records obtained by the Chicago Sun-Times showed  Tchen emailed Foxx on Feb. 1 saying she “wanted to give you a call on behalf of Jussie Smollett and family, who I know. They have concerns about the investigation.”

Foxx later responded, “Spoke to [Chicago Police] Superintendent [Eddie] Johnson. I convinced him to reach out to FBI to ask that they take over the investigation. He is reaching out now and will get [back] to me shortly.”

Tchen wore several hats during the Obama administration, where she served as an assistant to President Barack Obama and as chief of staff to the first lady.

She served as the executive director for the Council on Women and Girls and the director of the White House Office of Public Engagement at different points, while heading up the first lady’s office.

Tchen became a partner in the law firm of Buckley LLC, working in its Chicago office, in September 2017.

She is a 1978 graduate of Radcliffe College at Harvard University, and in 1984 earned her law degree at Northwestern University. She received the Women’s Bar Association of Illinois’ Leadership Award in 1999; the “Women of Achievement” award from the Anti-Defamation League in 1996; and Chicago Lawyer magazine’s “Person of the Year” award in 1994.

During a 25-year stint at the law firm of Skadden, Arps, Slate, Meagher & Flom LLP, she successfully argued cases before both the U.S. Supreme Court and the Illinois Supreme Court, according to the Buckley firm.

Tchen was an active voice in combating sexual harassment and helped establish the Time’s Up Legal Defense Fund, which provides legal support to women and men who have experienced sexual harassment in the workplace.

They knew one another well before either lived in Chicago, the Chicago Tribune reported. They grew up together near Cleveland in Beachwood, Ohio.