Why Obama Should Not Be Using Our Military for Political Leverage 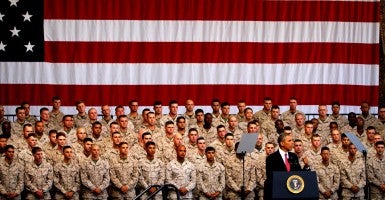 President Obama will veto the defense authorization bill today with a photo-op, and by doing so will highlight Washington at its worst.

Instead of dealing with the bill on its merits, Obama is using the defense bill for political leverage. This is the wrong way to handle our national security.

Many Americans rightfully find Washington’s way of doing things disturbing. Instead of treating issues individually, politicians will often attach unpopular policies to popular bills in order to ram them through. For example, just this summer, members of Congress were trying to attach the Export-Import Bank reauthorization to the Highway Bill, two completely unconnected issues.

Conservatives and liberals alike find this practice of linking unconnected issues disturbing. A particular proposal or issue should be considered on its own merits. If it can’t pass alone, it probably shouldn’t pass.

To be clear, the defense bill cannot increase non-defense spending.

In fact, the defense bill doesn’t spend any money—it just establishes authorized budgets and policies for our military. But in this case, the facts don’t matter. Obama has been clear that he wants more spending for his domestic, liberal priorities and he is willing to use the defense bill as leverage.

This defense bill has a wide range of important provisions, some of which the president may not like. The bill keeps terrorist detainees at Guantanamo Bay in Cuba. It provides for lethal defensive aid to Ukraine. It cuts overgrown Pentagon bureaucracies and begins reforming the military’s retirement system.

A debate about any of the provisions in the bill is legitimate and important. But vetoing the bill for political leverage is not how Washington should operate.

If you include the major entitlement expansions under Obama, the numbers are even more striking. Social and economic spending has increased 37 percent from 2008 to 2015.

In short, the president’s domestic priorities have been seeing significant funding increases while defense has been cut, but the president wants more and is willing to hold defense at risk.

Obama should not be using our military for political leverage. The budgets for the president’s liberal priorities have gone up significantly while he has been in office, but the president isn’t satisfied and is willing to use a national security bill as leverage for more. Vetoing the defense bill in order to increase domestic spending is wrong and is Washington at its worst.