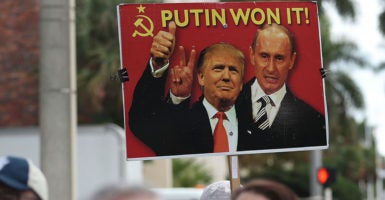 Even after the release of the Mueller report's findings, 84 percent of Democrats remain unpersuaded. Pictured: A person holds a sign while waiting for Roger Stone, a former adviser to President Donald Trump, to leave the Federal Courthouse on Jan. 25 in Fort Lauderdale, Florida. Stone was charged by special counsel Robert Mueller of obstruction, giving false statements, and witness tampering. (Photo: Joe Raedle/Getty Images)

Why get all caught up in whether something is true or not when the fantasy is so much more appealing?

That seems to be the spirit of some on the left in light of the report by special counsel Robert Mueller, which found no collusion between Russia and President Donald Trump.

You’d think that might have slowed the roll of some liberals, who have spent most of the past two years shouting about the alleged collusion.

He added, “We will continue to investigate the counterintelligence issues. That is, is the president or people around him compromised in any way by a hostile foreign power? … It doesn’t appear that was any part of Mueller’s report.”

Meanwhile, liberal darling Rep. Eric Swalwell, D-Calif., refused to take back his past comment that Trump is a “Russian agent.” Instead, in a Fox News interview Tuesday, Swalwell said, “Donald Trump works on Russia’s behalf.”

“Just because he’s not been criminally indicted for collusion doesn’t mean he has not conducted colluding behavior with the Russians,” Swalwell added.

Conspicuously missing: any apologies to Trump for spending the last two years suggesting he was a traitor to his country.

No wonder most of the country seems unaware of what the actual findings of the Mueller report were. A new Reuters/Ipsos poll, conducted Monday and Tuesday after the report’s findings were released, found that a whopping 48 percent of Americans still believe that “President Trump or someone from his campaign worked with Russia to influence the 2016 election.”

Among Democrats, it’s clear that wishful thinking, not evidence, is carrying the day: An insane 84 percent still think this is true.

Turns out, two years of wall-to-wall media coverage insinuating—often based on anonymous sources—that Trump was working secretly with Russia can’t be undone so easily.

ABC, CBS and NBC evening newscasts produced a combined 2,284 minutes of ‘collusion’ coverage . … That’s an average of roughly three minutes a night, every night, for an astonishing 791 days—a level of coverage normally associated only with a major war or a presidential election. [emphasis in original]

Guys, that’s not even counting all the time MSNBC spent on it.

Nor was it just TV. Axios reported, “Since May 2017, 533,074 web articles have been published about Russia and Trump/Mueller,” citing data from NewsWhip, a company The Daily Signal uses.

Apparently, it takes awhile to realize that something you heard insinuated for two years, everywhere and all the time, isn’t actually true.

Perhaps in time, more people will realize what the Mueller report actually found. But now, it’s time for the media and liberals who fomented this story, without evidence, to own their error and make clear what the truth is.