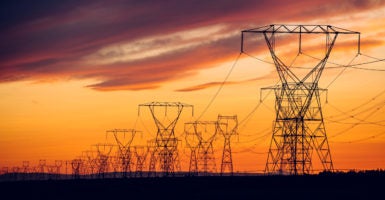 "Congress needs to build on the helpful cuts the president has proposed for the Energy Department," writes Katie Tubb. (Photo: Pete Saloutos/Getty Images)

We can’t ignore the numbers when talking about the federal budget. Twenty-two trillion dollars in the hole is a scary place to be, and President Donald Trump’s budget proposes some good steps toward climbing up and out.

But when we’re talking about the Department of Energy’s budget, there’s a lot more to be said.

Congress can’t balance the federal budget just by cutting the Energy Department’s $35.5 billion budget. But it can address the real mission creep of government into the everyday lives of Americans.

The Energy Department has routinely implemented policies that distort free competition and choice.

Take, for example, energy efficiency standards set by the department’s Office of Energy Efficiency and Renewable Energy. The decisions Americans make about their showers, ovens, microwaves, and even lightbulbs are preconditioned by what this office says are “acceptable” choices—namely, those that meet the government’s definition of “energy efficient.”

It doesn’t matter if you prefer a more durable washing machine, even if it’s a little more energy-intensive. And forget that the premise for the underlying law—the 1970s oil crisis—is obsolete at best, given that today, Americans are sitting on more energy resources of every variety than they know what to do with.

The president’s proposed budget for the Energy Department would begin to scale back this mission creep, even drawing on the past budgets of former President Bill Clinton to reduce not just the size, but also the scope of the federal government.

Here are three takeaways from the president’s energy budget proposal.

The Energy Department’s budget proposal would reduce or cut a number of programs that intervene in energy markets. Specifically:

2. Leaves some opportunities on the table.

The budget would reduce, but not eliminate, subsidized research and development in the offices of Science, Energy Efficiency and Renewable Energy, Nuclear Energy, and Fossil Energy. Congress should eliminate these applied offices as they serve to subsidize the renewable, nuclear, and fossil industries.

For example, the budget proposes $158 million for an Advanced Energy Storage Initiative. Why should taxpayers subsidize an industry that is already experiencing double-digit growth in the U.S. and which Bloomberg New Energy Finance says is a $620 billion investment opportunity over the next two decades?

Perhaps these projects have merit of their own, but it’s not the role of the federal government to do the work of companies and entrepreneurs for them. Despite dire protestations from those on the receiving end of these programs, innovation in the energy sector will not stop simply because the federal taxpayer isn’t footing the bill.

Congress unwisely made the Energy Department responsible for nuclear waste management, rather than the nuclear energy companies that generate waste. Unsurprisingly, decades of delay and politicization have ensued, costing taxpayers billions of dollars in lawsuits.

The president’s budget takes a positive first step in addressing the problem by proposing funds for the Energy Department and Nuclear Regulatory Energy Commission to conduct a scientific review of a nuclear waste repository at Yucca Mountain, allocating $116 million and $38 million for those agencies, respectively.

Finishing this review does not commit the government to building the Yucca Mountain repository. It merely would bring all of the information to the table for Congress, Nevada, and the nuclear industry to make decisions about next steps.

Yet the proposal goes too far by also calling to reinstate a problematic arbitrary fee that is one of the fundamental flaws in the current approach.

Congress needs to develop a more dynamic approach that would make the private sector responsible for managing its own nuclear waste. There is plenty of evidence that the private sector can do so, with the federal government maintaining a regulatory oversight role.

Congress needs to build on the helpful cuts the president has proposed for the Energy Department. But these cuts are about more than dollars and cents. Reducing the size and scope of the federal government is just another way of saying that Americans should have move power to make their own decisions.