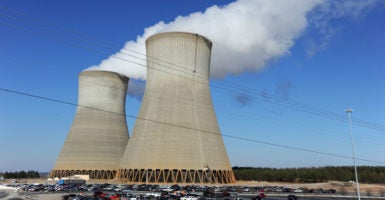 Some of the dust is beginning to settle after another projected cost increase of the Vogtle power station in Georgia, where the only two nuclear power plants being built in the U.S. today are located.

Completion of the 2,200-megawatt project was unclear last week, as the three biggest utility partners fell out over yet another cost overrun.

Partner Oglethorp Power Corp. argued that it could no longer pass costs on to its customers, hurling the project to a vote among the owners as to whether to continue construction. Several tense days later, they agreed to do so.

The two reactors were originally estimated to cost $14.3 billion and come online this year, in time to take advantage of federal production tax credits and $8.3 billion in Department of Energy loan guarantees.

The project is now expected to cost more than $28 billion, and construction delays inspired Congress to modify and extend the deadline for eligibility for tax credits.

What are observers to make of this bitter controversy? A few reflections on the drama:

Over the past few years, some in the nuclear industry and its supporters have pinned early closures and general malaise in the industry on strong competition from inexpensive natural gas.

There is surely some truth to that for existing nuclear-power plants, but the nuclear industry has faced low natural-gas prices before.

Further, a $28 billion new build that is behind schedule and doubled in price clearly isn’t a problem of tough markets, but a symptom of problems within the greater industry, decades of nonsensical regulation, and market interventions that unfairly reward competitors.

Take just one issue; namely, radiation-exposure levels. The Environmental Protection Agency has maintained absurdly stringent standards for nuclear-power facilities. Some might say “Better to be safe than sorry,” but actually it’s better to be accurate—especially when it comes to radiation.

We have the know-how and resources to correct these standards, but the political will remains elusive.

The Vogtle project is the last remaining new nuclear build to attempt to take advantage of federal loan guarantees and production tax credits offered in the Energy Policy Act of 2005.

Politicians do not—and no matter how well-intentioned, cannot—take the long view in playing market investors. Energy markets are incredibly dynamic, and there have been a number of unanticipated turns since 2005, not least of which were the fracking boom, plateaued electricity demand, the Fukushima nuclear accident in Japan, and the unresolved Yucca Mountain nuclear waste-disposal fiasco.

But subsidies have tied nuclear-energy investment and innovation to political whims, and at best muddled smart business decisions. Consequently, it is by the forced goodwill of the Georgia electricity ratepayer that federal taxpayers aren’t (yet) paying for another Solyndra of nuclear proportions.

That boondoggle cost taxpayers $535 million, which will look like a bargain if Department of Energy has to come through on its $8.3 billion loan guarantee for Vogtle.

Contrast the experience of customers in Georgia’s monopolized electricity sector with the competitive market in Texas. Not long before the Vogtle project started, the South Texas Project began work on two nuclear reactors.

Because electricity providers in Texas cannot use the force of government to recover their investment costs and have to compete to earn their customers’ business, the South Texas Project constantly had to consider market changes.

The project was canceled in 2011, and investors (not customers) had to eat a sunk cost of more than $480 million.

In contrast, Georgians must cover the Vogtle’s $28 billion in ballooning costs, having no other choice in a regulated monopoly.

Government-protected monopolies are responsive to politicians insofar as they have to be. Markets ultimately drive solutions that are efficient, innovative, and most responsive to the unique interests of consumers.

If the nuclear industry is to succeed in the U.S.—and there are many reasons why it should—the industry has to be able to innovate and build new plants.

The Vogtle fiasco casts a shadow on that future, but if we can finally get to the task of fixing the underlying policy problems holding nuclear back, and if we can swear off the siren song of subsidies, which lead down a predictable path of failure, then nuclear power will have the shot it deserves.