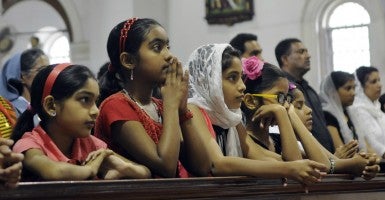 Researchers say the demographics of each of the world’s major religions will undergo significant changes by the year 2050.

In a study titled “The Future of World Religions: Population Growth Projections, 2010-2050,” the Pew Research Center estimated how many followers each of the world’s major religions will have in the year 2050.

Pew analyzed demographics that will determine the populations of major world religions in 2050, such as the size of each group’s youth population, fertility rates and ability to attract converts.

They predict that during the next 40 years, Christianity will remain the faith with the most followers, but Islam will experience the most growth.

According to Pew, of the 6.9 billion people on Earth in 2010, there were an estimated 2.2 billion Christians and 1.6 billion Muslims.

In 2050, they estimate, there will be 9.3 billion people on Earth, including 2.9 billion Christians and 2.8 billion Muslims. Pew notes that it would be the first time in world history the populations of the two groups were so similar in size.

By Pew’s estimate, there were 1.1 billion “atheists, agnostics and people who do not identify with any particular religion” on Earth in 2010. In 2050, there will be approximately 1.2 billion. Bearing in mind the estimated 2050 human population of 9.3 billion, people who are unaffiliated will represent a much smaller percentage of the world’s population.

Pew notes that Judaism is the “smallest religious group” they studied separately. The world’s Jewish population is expected to grow by 16 percent over the next 40 years. They estimate that in 2010, there were 14 million Jews worldwide, and in 2050 there will be 16.1 million.

The Buddhist population is aging, they note, and Hindus are expected to keep pace with overall population growth.

Pew combined all other faiths in an “umbrella category” including “Baha’is, Jains, Sikhs, Taoists and many smaller faiths.” These groups are projected to grow from 58 million to more than 61 million by 2050.

In the year 2050, about 10 percent of Europe’s population will be Muslim.

Sub-Saharan Africa will be home to 40 percent of the world’s Christians. High fertility rates on the continent will mean an increased population for several faiths.

Hinduism will remain the dominant religion in India, but the country will replace Indonesia as home to the largest Muslim population in the world.

In the United States

In 2010, Christians accounted for three-quarters of the American public. By 2050, only two thirds of Americans will practice Christianity. Islam will replace Judaism as the nation’s most prominent non-Christian faith.