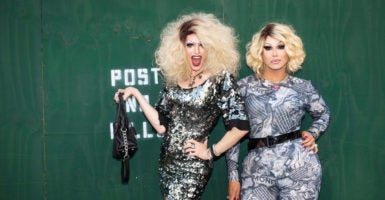 Middle schoolers in Santa Ana, California, went to an “LGBT Fair” that no one asked parents' permission for. There were people in drag giving makeup lessons in school. (Photo: HEX/Getty Images)

“You did what?!” Parents across Santa Ana couldn’t believe it. In one house after another, the answer to “How was school today?” was nothing like they expected. Moms and dads listened in disbelief as their middle schoolers talked about going to an “LGBT Fair” that no one bothered to ask their permission for. There were even people in drag, their 11-year-olds said, giving makeup lessons—right there in school.

Townhall’s Kira Davis listened as one mom fumed about not knowing about the fair until after it happened. There wasn’t even an opportunity to opt out, she complained at last Tuesday’s school board meeting.

Unfortunately, that was just one of the infuriating examples the largely-Hispanic community used to explain how fed up it was with the state’s new sex ed law. But the problem is a lot bigger than the law, Davis explained. It’s how liberals are exploiting the Spanish-speaking communities to implement it.

In one of the more fiery exchanges of the night, a mom seethed that so many liberals were trying to marginalize California’s multi-ethnic communities. “How can a state that claims to be so much for the rights of immigrants and minorities then ignore our concerns on purpose? They are hypocrites!”

Although California’s law does order schools to offer the curriculum outline in both languages, Santa Ana hasn’t made the Spanish materials available to parents. Hardly an accident, Davis argues, since most of the communities like this one are “whole-heartedly opposed to LGBT-based sex-ed.”

One thing’s for sure: The more radical the social policy, the greater the opportunity for conservatives. Santa Ana’s meeting room was bursting with the latest evidence that Democrats have a huge problem on their hands, especially when it comes to abortion and sex ed.

What’s even more insulting, these parents pointed out, is how liberals are purposefully taking advantage of them—deceptively leaving families in the dark because they know “this particular community would absolutely not approve of the more graphic elements.” Not to mention, Davis goes on, “the unmonitored discussions” on gender and sexuality.

Like a lot of other California districts, these parents have reached their boiling point. Tuesday’s meeting was so jam-packed that even the overflow rooms could barely hold the families. Holding signs that read, “No SeXXEd!” moms and dads fended off the ACLU attorneys who’d been farmed out across the state to handle complaints. Later, parents were even more furious to find out that 4 of the 5 people who testified in favor of the curriculum didn’t even live in the district.

In between emotional testimonies, Davis was appalled at how condescending board members were, firing back hostile—and at times, demeaning—answers. “As an outside observer, I was terribly vexed by how dismissive and deceptive school authorities were to this particular group of parents. It was clear they did not believe immigrant Hispanic parents were engaged or informed enough to be welcomed into the process.”

“All these people were asking for was a say, a chance to be involved, to be heard and to be active participants in the education of their children. They were asking for respect and instead received nothing but contempt and disrespect from the very people they trust to care for the development of their students.” But, she warns, “If you think this is just another case of ‘whacky’ California paying the price for their ‘whacky’ voting habits, think again. This is coming to a state and a school district near you.”

Are you prepared for that day? Make sure you’ve read the Family Research Council’s “A Parent’s Guide to the Transgender Movement in Education”—and share it with your friends.