Blackouts Loom in California as Electricity Prices Are ‘Absolutely Exploding’ 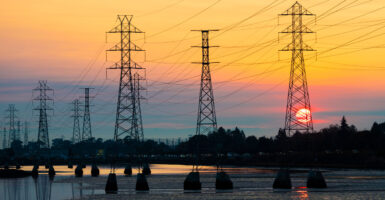 Last week, the California Independent System Operator issued a “flex alert” that asked the state’s consumers to reduce their power use “to reduce stress on the grid and avoid power outages.” Pictured: Power transmission towers are silhouetted by the rising sun in Burlingame, California, Oct. 26, 2019. (Photo: Yichuan Cao/NurPhoto via Getty Images)

Last week, the state’s grid operator, the California Independent System Operator, issued a “flex alert” that asked the state’s consumers to reduce their power use “to reduce stress on the grid and avoid power outages.”

In 2020, California’s electricity prices jumped by 7.5%, making it the biggest price increase of any state in the country last year and nearly seven times the increase that was seen in the United States as a whole.

According to data from the Energy Information Administration, the all-sector price of electricity in California last year jumped to 18.15 cents per kilowatt-hour, which means that Californians are now paying about 70% more for their electricity than the U.S. average all-sector rate of 10.66 cents per kWh. Even more worrisome: California’s electricity rates are expected to soar over the next decade. (More on that in a moment.)

Before going further, let me state the obvious: California policymakers are providing a case study in how not to manage an electric grid. Furthermore, that case study shows what could happen if policymakers at the state and federal levels decide to follow California’s radical decarbonization mandates, which include a requirement for 100% zero-carbon electricity by 2045 and an economy-wide goal of carbon neutrality by 2045.

Even though the state’s tattered electric grid can barely meet existing demand—and more rolling blackouts are almost certain this summer—California continues to pile bad policy on top of bad policy.

The state has banned the future sale of cars powered by internal combustion engines, which will result in dramatic increases in electricity demand and will require, according to a recent report by the California Energy Commission, the installation of 1.2 million new electric vehicle charging stations by 2030.

Bans on natural gas will further increase electricity demand. Cheered on by the Sierra Club, which is getting tens of millions of dollars from billionaire Michael Bloomberg, about 46 California communities have banned the use of natural gas in homes and businesses.

Making the whole thing even more absurd is that California is pledging to achieve these goals while closing the state’s last remaining nuclear power plant, the Diablo Canyon Power Plant, which by itself produces nearly 10% of all the juice consumed in California.

The state’s surging energy costs demonstrate the regressive nature of decarbonization policies and how renewable energy mandates drive up the price of power. California’s electricity prices are “absolutely exploding,” says Mark Nelson, an energy analyst and the managing director of the Radiant Energy Fund, who used that phrase on a recent episode of “The Power Hungry Podcast.”

He added that the electricity price hikes are happening before the state’s utilities have incurred all of the costs of the deadly wildfires that swept the state, trimming millions of trees to prevent future wildfires, and adding all the mandated renewable energy capacity, transmission lines, and new battery storage that the state will need to meet its climate goals. Further, the costs do not include all of the costs that will be incurred after the proposed shuttering of Diablo Canyon in 2025.

Last week’s power conservation requests are likely the first of many to come. On May 27, California Independent System Operator CEO Elliot Mainzer warned that if the state is hit with another hot summer like the one that required rolling blackouts that left more than 800,000 homes and businesses without power over two days last August, “our numbers tell us the grid will be stressed again.”

That warning followed a May 12 California Independent System Operator press release that warned that “reliability risks remain” and the state will likely need “voluntary” electricity conservation this summer to avoid a repeat of last year’s blackouts.

The specter of more blackouts is yet more bad news for California’s beleaguered consumers. Between 2010 and 2020, the state’s electricity prices jumped by 39.5%, which was the biggest increase of any state in the U.S. Even more worrisome: California’s electricity rates will soar over the next decade.

In a report issued in February, the California Public Utility Commission warned that the state’s energy costs are growing far faster than the rate of inflation, and that “energy bills will become less affordable over time.”

What’s driving up prices? The report says that “electrification goals and wildlife mitigation plans are among the near-term needs … that place upward pressure on rates and bills.”

The report projected that residents living in hotter regions (that is, those who can’t afford to live close to the coast) who get their electricity from San Diego Gas & Electric could see their monthly power bills increase by 47% between now and 2030. When future gasoline price increases are included, overall energy costs for that same consumer are projected to increase by 60%.

Furthermore, the California Public Utility Commission expects residential ratepayers in San Diego Gas & Electric’s service territory will be paying close to 45 cents per kilowatt-hour by 2030. For reference, that is more than three times the current average price of residential electricity.

Meanwhile, the state’s renewable plans are being thwarted by rural Californians who don’t want wind and solar projects in their neighborhoods. California has added essentially no new wind capacity since 2013.

The latest rejection of Big Wind happened on Tuesday when the Shasta County Planning Commission unanimously rejected a permit for Fountain Wind, a project that proposed to put 216 megawatts of wind capacity (and about 71 turbines) in a mountainous area west of the town of Burney.

The project met fierce resistance. According to David Benda, a reporter for the Redding Record Searchlight, “The 5-0 vote capped a marathon meeting that went nearly 10 hours and ended just before 11 p.m. The unanimous vote was met with cheers.”

As I have previously reported, the backlash against Big Wind goes far beyond California. It can be seen throughout Europe and from Maine to Hawaii. Since 2015, more than 300 communities in the U.S. have rejected or restricted wind projects.

In addition to the raging land-use conflicts, California policymakers are facing a growing backlash from California’s Latino population, which is the largest in the country.

As I reported last year, the state’s Latino leaders have sued the state over its housing, energy, and climate regulations. Jennifer Hernandez, the lead lawyer for The Two Hundred, a coalition of Latino leaders, told me those regulations are “incredibly regressive” and are bringing “Appalachia economics” to California’s “non-coastal elites.”

Robert Apodaca, the founder of United Latinos Vote, a nonprofit group, told me recently that the ongoing electricity price hikes in the state “will be crippling for low- and middle-income Californians, particularly for those who live in the Central Valley and the Inland Empire. They are going to really feel the heat, in more ways than one.”

The punchline here is clear: The blackouts and high electricity prices that are plaguing California provide a neon-lit warning sign about the electric reliability and energy affordability crises that loom if policymakers attempt to decarbonize our economy too quickly.