The Lessons of Waging War Against the Dead 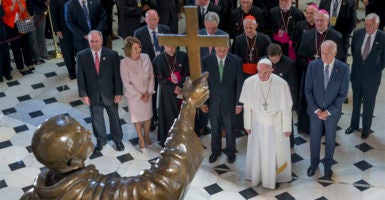 During his five-day trip to the U.S., Pope Francis pauses in front of a sculpture of Spanish-born Junipero Serra, the Franciscan friar known for starting missions in California, in Statuary Hall at the U.S. Capitol on Sept. 24, 2015. (Photo: Michael Reynolds/White House Pool/ISP Pool Images/Corbis/VCG/ Getty Images)

The 21st century is in danger of becoming an era of statue-smashing and historical erasure. Not since the iconoclasts of the Byzantine Empire or the epidemic of statue destruction during the French Revolution has the world seen anything like the current war on the past.

In 2001, the primeval Taliban blew up two ancient Buddha statues in Afghanistan on grounds that their very existence was sacrilegious to Islam.

In 2015, ISIS militants entered a museum in Mosul, Iraq, and destroyed ancient, pre-Islamic statues and idols. Their mute crime? These artifacts predated the prophet Muhammad.

The West prides itself in the idea that liberal societies would never descend into such nihilism.

In the last two years, there has been a rash of statue toppling throughout the American South, aimed at wiping out memorialization of Confederate heroes. The pretense is that the Civil War can only be regarded as tragic in terms of the present oppression of the descendants of Southern slaves—154 years after the extinction of the Confederate states.

There is also a renewed crusade to erase the memory of Italian explorer Christopher Columbus. Los Angeles removed a Columbus statue in November based on the premise that his 1492 discovery of the Americas began a disastrous genocide in the Western Hemisphere.

Last month, the Northern California town of Arcata did away with a statue of former President William McKinley because he supposedly pushed policies detrimental to Native Americans.

There have been some unfortunate lessons from such vendettas against the images and names of the past.

One, such attacks usually revealed a lack of confidence. The general insecurity of the present could supposedly be remedied by destroying mute statutes or the legacies of the dead, who could offer no rebuttal.

The subtext of most current name-changing and icon-toppling is that particular victimized groups blame their current plight on the past. They assume that by destroying long-dead supposed enemies, they will be liberated—or at least feel better in the present.

Yet knocking down images of Columbus will not change the fact that millions of indigenous people in Central America and Mexico are currently abandoning their ancestral homelands and emigrating northward to quite different landscapes that reflect European and American traditions and political, economic, and cultural values.

Two, opportunism, not logic, always seems to determine the targets of destruction.

This remains true today. If mass slaughter in the past offered a reason to obliterate remembrance of the guilty, then certainly sports teams should drop brand names such as “Aztecs.” Likewise, communities should topple statues honoring various Aztec gods, including the one in my own hometown: Selma, California.

After all, the Aztec Empire annually butchered thousands of innocent women and children captives on the altars of their hungry gods. The Aztecs were certainly far crueler conquerors, imperialists, and colonialists than was former President McKinley. Yet apparently the Aztecs, as indigenous peoples, earn a pass on the systematic mass murder of their enslaved indigenous subjects.

Stanford University has changed the name of two buildings and a mall that had been named for Father Junipero Serra, the heroic 18th-century Spanish founder of the California missions. Serra was reputed to be unkind to the indigenous people whom he sought to convert to Christianity.

Stanford students and faculty could have found a much easier target in their war against the dead: the eponymous founder of their university, Leland Stanford himself. Stanford was a 19th-century railroad robber baron who brutally imported and exploited Asian labor and was explicit in his low regard for non-white peoples.

Yet it is one thing to virtue-signal by renaming a building and quite another for progressive students to rebrand their university—and thereby lose the prestigious Stanford trademark that is seen as their gateway to career advancement.

Third, in the past there usually has been a cowardly element to historical erasure. Destruction was often done at night by roving vandals, or was sanctioned by extremist groups who bullied objectors.

So too in the present. Many Confederate statues were torn down or defaced at night. City councils voted to change names or remove icons after being bullied by small pressure groups and media hysteria. They rarely referred the issue to referenda.

Four, ignorance both accompanies and explains the arrogance of historical erasure, past and present.

Recently, vandals in North Carolina set fire to a statue of General Lee. But they got the wrong Lee. Their target was not a statue of Confederate Gen. Robert E. Lee, but a statue of World War II Maj. Gen. William C. Lee, who campaigned for the creation of a U.S. Army airborne division and helped plan the invasion of Normandy.

The past is not a melodrama but more often a tragedy. Destroying history will not make you feel good about the present. Studying and learning from it might.