Why People Are Leaving Blue States in Droves 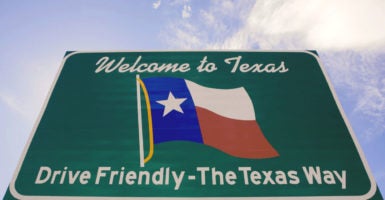 Some Americans think state boundaries and the principle of federalism are outdated relics from the past. They couldn’t be further from the truth.

New data in a report from the American Legislative Exchange Council (ALEC) paint a clear picture: States with the best policies are being rewarded with an influx of residents, and states with unattractive policies are losing residents.

Take two of the most high-tax, high-spend states in the union: New York and Illinois.

Over the past decade, New York has suffered a net loss of nearly 1.5 million residents and over 650,000 Illinoisans have moved elsewhere. Meanwhile, Texas, a right-to-work state with no income or estate tax, saw its population grow by 1.3 million.

Despite their appealing metropolitan hubs, New York and Illinois are shedding denizens.

States that scored high on the ALEC-Laffer State Economic Competitiveness Index, which takes into consideration 15 variables from the number of public employees to sales tax rates, have seen an influx of job-creating companies and taxpaying citizens over the last decade, while low-scoring blue states have been losing both.

The only good tax is a dead tax. I want to bury the business franchise tax in a coffin. #txlege #tcot @YoungCons https://t.co/AMATO62KXX

While tax rates and labor laws are not the only factors that contribute to a state’s flourishing, the correlation between sound economic policy and private sector growth is clear.

Federalism is about creating competition between the states by allowing them to craft their own respective policies, and then seeing what policies work best. This system has even more to commend it today than at the time of the founding.

Contrary to the expectations of progressive social scientists and pundits, government spending stimulates the government, but little else. A high minimum wage ultimately hurts those it is meant to serve. Progressive tax rates do not close chasmal blue state budget gaps.

Federalism is not just a boon to citizens—it is an advantage to state policymakers as well.

The states are often thought of as “laboratories of democracy.” That expression was initially coined by Justice Louis Brandeis, who ironically did not subscribe to the competitive view of federalism.

Many progressives claim that allowing states wide discretion to establish their own fiscal policies and regulatory regimes will result in a “race to the bottom” in which states attempt to drive out their poor and needy by decreasing welfare payments and lure in corporations by eliminating important regulations.

Political scientists have shown, however, that when it comes to welfare programs, public health regulations, and environmental protections, competition is what drives innovative and efficient solutions.

In other words, for progressives who are willing to pay the high price tag for expensive public services, there are still plenty of states willing to oblige.

Another critique of studies like the ALEC-Laffer Index is they heap too much praise on red states that implement conservative fiscal policies when, in fact, their citizens are shielded from the real downsides of fiscal conservatism—namely, limited spending on social programs.

On its face, this critique has some merit. Many of the states that score the highest on the ALEC-Laffer Index also tend to be states that get more money back from the federal government—mostly in the form of welfare payments—than they pay in taxes.

North Dakota, ranked No. 3 on the ALEC-Laffer Index, gets back $1.68 for every dollar paid in taxes. Tennessee and Oklahoma, also in the ALEC-Laffer top 10, get more back from the federal coffers than they put in as well.

Meanwhile, California, only four spots from the bottom on the ALEC-Laffer Index, gets only 78 cents back for every dollar sent to Washington. New York, dead last on the index, retrieves only 79 cents.

Under current law, individuals can deduct their state taxes from their overall income for the purposes of determining what they owe the federal government in taxes. Thus, state politicians can hike up their tax rates without changing the effective tax rate their citizens pay.

While federal spending may make low-tax red states more appealing to residents and potential residents, the state tax deduction does the same for blue states.

Still, the broader thrust of this progressive critique is correct. Federal policy does alleviate some of the downsides that come along with both conservative and progressive fiscal policy.

For the states to function as true laboratories of democracy, they should bear even more of the costs—and reap more of the rewards—of their policies.

The federal government should put more of the onus of funding and managing social welfare programs on the states and also consider eliminating the state and local tax deduction. This way, the real costs and benefits of state policies will be clear to citizens who can vote—or move—accordingly.

Were this done, the appeal of economically responsible red states would likely be even higher than ALEC’s study demonstrates it already is.

Lessons learned from state experimentation are of critical importance today.

As ALEC’s recent report shows, every one of the 50 states is wrestling with the mounting expense of unfunded liabilities caused by generous pensions and social welfare programs. Some states, like Arizona, are addressing the problem early and aggressively and others are taking note.

As state governments roll out various packages of cuts and revenue-raising measures to push themselves back into the black, they will provide test cases not just for one another, but for our radically insolvent federal government as well.