US-China Trade Dispute Is Already Hurting US Farmers and Ranchers 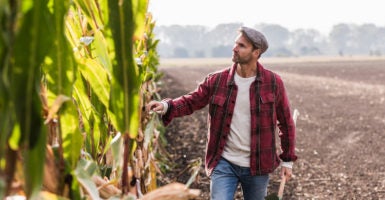 The USDA forecasts that in 2019, China will drop from the second-largest to the fifth-largest agricultural export market for the United States. (Photo: Westend61/Getty Images)

The ongoing U.S.-China trade dispute is threatening the U.S. economy as a whole, and is hurting American farmers and ranchers.

In recent years, China has been among the top two largest markets for U.S. agricultural exports. And much more potential for increased exports remains. The U.S. Department of Agriculture has said that “China offers our best opportunity for major export growth in the future.”

However, in 2018, the U.S. imposed major tariffs on Chinese goods. These U.S. tariffs are a self-inflicted wound on the entire economy, including the agricultural sector, and could limit opportunities in China. The tariffs have created a tit-for-tat situation in which China responded with retaliatory tariffs, making it more difficult for U.S farmers and ranchers to export their products to China.

The tariffs serve as a tax on a wide range of imported goods. It is not Chinese businesses, but American businesses that pay for the tariffs when importing Chinese goods, and then they likely pass the costs on to their customers.

The Congressional Research Service has explained that China “has levied retaliatory tariffs on about 800 U.S. food and agricultural products that were worth about $20.6 billion in exports to that country in 2017.”

As shown in the table below, China is imposing significant tariffs on important U.S. agricultural exports, such as soybeans (25 percent), many pork products (50 percent for many of these products),and sorghum (25 percent).

The retaliatory tariffs could cause long-term damage to U.S. agricultural exports to China. This is in part due to other countries stepping in to meet Chinese demand and a breakdown in some trading relationships that American farmers and ranchers have already forged in China.

The American Soybean Association has asserted that when and if the U.S. rescinds the Section 301 tariffs on China, and China then lifts its 25 percent retaliatory tariffs, “the process of rebuilding the U.S. [soybean] market in China could take years.”

One of the most telling statistics showing the harms of this trade dispute is the USDA’s current forecast that in 2019, China will drop from the second-largest to the fifth-largest agricultural export market for the United States.

To prevent this harm, the United States should act now to eliminate the tariffs. Admittedly, this wouldn’t help the U.S. to address China’s alleged unfair trade practices. But the U.S. can do that by making greater use of the World Trade Organization dispute settlement system. In fact, one of the best features of the World Trade Organization is that it provides a legal venue to challenge foreign trade barriers.

The U.S. has had major success using the World Trade Organization dispute settlement process in the past. For example:

The United States government has initiated 29 dispute settlement proceedings over other [World Trade Organization] members’ barriers to U.S. farm exports. The United States achieved a ‘victory’—an affirmative ruling and/or the elimination or modification of the measure at issue—in every single [World Trade Organization] case that moved beyond the first government-to-government ‘consultations’ stage (and even in many of the consultations-only disputes).

In fact, just a few weeks ago, the United States won a major World Trade Organization case against China over improper agricultural subsidies.

In 1988, President Ronald Reagan delivered a radio address to the nation in which he espoused the benefits of free trade:

[O]ne of the key factors behind our nation’s great prosperity is the open trade policy that allows the American people to freely exchange goods and services with free people around the world. … Over the past 200 years, not only has the argument against tariffs and trade barriers won nearly universal agreement among economists, but it has also proven itself in the real world, where we have seen free-trading nations prosper while protectionist countries fall behind.

Reagan’s words were true then, and they remain true today. A commitment to free trade will help the United States as a whole to prosper, and will expand opportunities for the nation’s farmers and ranchers to sell even more of their products around the world.