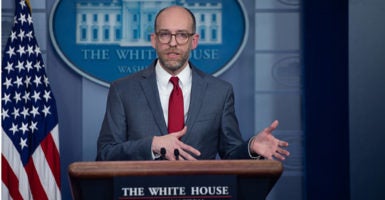 Russell Vought, acting director of the Office of Management and Budget, speaks at a press briefing on the fiscal 2020 budget Monday at the White House. (Photo: Saul Loeb AFP/Getty Images)

The reaction to the spending blueprint by Democrats was predictably negative.

The $4.7 trillion proposal, which projects a $1.1 trillion deficit, also asks Congress to cut discretionary spending, something it hasn’t done in recent years, even when under Republican control.

“You mention mandatory spending. It is a driver. We have more reforms than any other president’s budget in history, but, look, what has happened for far too long is that Congress has blamed mandatory spending and then increased discretionary spending, which they have a vote on every single year by large degrees,” Office of Management and Budget acting Director Russ Vought told The Daily Signal on Monday.

The fiscal 2020 spending blueprint cuts non-defense discretionary spending by 5 percent across the board, for a total of $2.7 trillion in savings for taxpayers over 10 years.

The OMB projects a balanced budget by 2034. Deficit spending, now 5 percent of the gross domestic product, would fall to 1 percent by 2029, according to the projections.

“They continue to let a paradigm exist in this country that says for every dollar in defense spending, we’re going to increase nondefense spending by a dollar,” Vought said at a press briefing. “We think we need to break that paradigm. We don’t think that paradigm allows us to get our fiscal house in order.”

Presidents are constitutionally required to present a budget proposal, but such proposals are never enacted as delivered. The document stands as an outline of administration priorities and represents what each department is requesting from Congress.

The budget proposes $478 million to hire and support 1,750 additional law enforcement officers and agents for Customs and Border Protection and for Immigration and Customs Enforcement.

The budget also would implement a requirement of at least 20 hours a week for work or job training for certain welfare benefits, such as food stamps. Work requirements for recipients in the Temporary Assistance for Needy Families (TANF) program was core to the welfare-reform legislation passed by a Republican Congress and signed by President Bill Clinton, a Democrat, in 1996.

“In terms of work requirements, it’s something that has been viewed as a success since the 1990s. We expand on it,” Vought said. “It is something we have long viewed as important with the same principles of reducing dependency that we saw in TANF and apply them to housing and to food stamps and to Medicaid. … There will be many workforce-development programs that will be funded as part of this budget.”

The Trump budget proposes spending $750 billion for the Defense Department. Of that, $718 billion is for the National Defense Strategy’s efforts to rebuilding readiness and for improving performance and affordability through reform. It also focuses on strategic competition with China, Russia, North Korea, and Iran.

It includes $4.8 billion in the Department of Health and Human Services for prevention and treatment programs for opioid abuse.

“After adding $2 trillion to the deficit with the GOP tax scam for the rich, President Trump wants to ransack as much as $2 trillion from Medicare and Medicaid,” she said. “While demanding billions more for his wasteful, ineffective wall, President Trump will steal from students and hungry families, from rural communities and American farmers, from clean air and clean water, and from vital, job-creating investments nationwide.”

The proposal would also limit what Medicare recipients have to pay for prescription drugs. Currently, Medicare has a 5 percent co-pay for high-priced medicines that could cost as much as $1,000 per pill. The dollar amount wasn’t specified.

Vought responded to one question about whether that constituted “cutting Medicare.”

“He’s not cutting Medicare in this budget,” Vought explained. “What we are doing is putting forward reforms that lower drug prices. Because Medicare pays such a very large share of drug prices in this country, this has the impact of finding savings.

“We’re also finding waste, fraud, and abuse. But Medicare spending will go up every single year by healthy margins, and there are no structural changes,” he said.