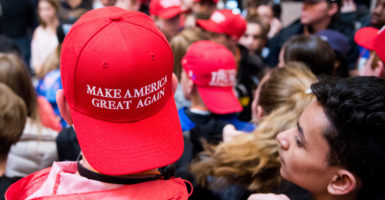 The incident occurred March 1 when Perry High School in Gilbert, Arizona, hosted its “Party in the USA” Spirit Day.

Heidi Jones and Jennifer Farris, the mothers of two girls in the group who wore the Trump gear, told the Arizona Republic newspaper that school officials asked students to take off their gear.

The school suspended Jones’ daughter, Logan, but a school spokesman later said that action was unrelated to the Spirit Day events.

According to Arizona Central, a spokesman for the Chandler Unified School District said that other than a Trump banner, students were “not asked to put away any Trump gear.”

But parents and students disputed that.

Principal Dan Serrano sent out an email to detail the school’s side of the story.

“The administration addressed an incident that occurred at lunch this past Friday, when students carrying political signage caused a disruption and created safety concern. The students were asked to put away the signage, and they complied,” Serrano wrote Saturday.

“However, after school ended for the day, the students unveiled the signage again in a manner that again caused concern for student safety. When the school’s resource officer asked the students to leave campus, they declined.”

Republicans in the Arizona House of Representatives have asked Arizona Attorney General Mark Brnovich, a Republican, to investigate what they called “possible free speech violations” and get some answers.

In a letter to Brnovich, the state lawmakers wrote:

The Chandler Unified School District, which includes Perry High School, has stated ‘its commitment to use its influence as a public educational institution to teach leaders, teachers, and staff members and students the value of an inclusive community and give them the tools to be culturally competent in our increasingly diverse society.’

Apparently, this commitment includes the hiring of an administrative staff member at the district level to serve as Director of Equity and Inclusion as well as the expense of $2 million to purchase diversity, equity, and inclusion curriculum for the district.

We ask you to ensure that these equity and inclusion programs truly espouse tolerance for all viewpoints, including Christianity and conservatism.

More than 40 people, including students, protested Monday outside the high school in support of free speech.