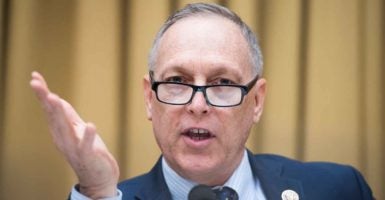 "We have to step up our game in looking at vehicles, people coming north and going south," says Rep. Andy Biggs, R-Ariz., pictured during a Sept. 24 hearing on the Trump administration's restrictions on travel from certain terrorism-plagued nations. (Photo: Tom William/CQ-Roll Call, Inc via Getty Images)

An Arizona lawmaker says he sees three concrete steps that should be taken to further secure the southern border with Mexico.

“No. 1, I make sure we do get the fence,” Rep. Andy Biggs, R-Ariz., co-chairman of the House’s Border Security Caucus, told The Daily Signal in an interview.

Chief Rodney Scott, the 24th chief of the U.S Border Patrol, recently announced on Twitter that 126 miles of the border wall have been completed, 213 miles are under construction, and 414 miles are in the pre-construction phase.

“That’s why you need a systemwide [reliance on] fences, because that barrier actually works,” Biggs said. “It slows people down enough so we can get our boots on the ground to interdict.”

The Arizona Republican, a member of the House Judiciary Committee, led a congressional delegation to the border in February that included fellow Republicans French Hill of Arkansas, Paul Gosar of Arizona, Glenn Grothman of Wisconsin, and Russ Fulcher of Idaho.

Biggs said physical barriers have made a difference for the better.

“Down in Yuma … where they have replaced the …  fencing that the Obama administration had, it has slowed down the trafficking whenever they put up the 30-foot bollard fencing,” he said.

Biggs said it also is important that the Department of Homeland Security invest in the appropriate vehicles necessary for rough terrain where it would be difficult to build a traditional fence or wall.

“I [would] make sure that we have the road infrastructure to get there, because there are places where we’re not necessarily going to put fence because it’s so rugged,” Biggs said. “You will still get smugglers through that area, but you’re going to get some roads and infrastructure wherever possible so we can get our boots on the ground there.”

Biggs suggested that forward operating bases might be necessary in some places to have more controlled entry points in those rugged areas where a fence may not be feasible.

Lastly, he said the government needs to place a greater emphasis on screening vehicles traveling from Mexico to the United States and from the U.S. back to Mexico.

“One other thing that we really have to do, we have to step up our game in looking at vehicles, people coming north and going south,” Biggs said. “We don’t really look at vehicles going south. “

“When we do,” he said, “we always find weapons and guns going back south. We always find stocks of cash flow back.”