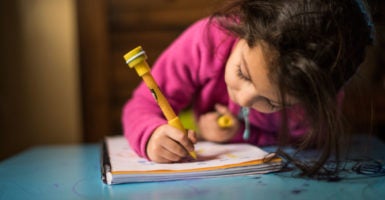 Emily Maxson is a member of the Young Leaders Program at The Heritage Foundation.

Who would you rather have choose your child’s school—a politician or a bureaucrat?

If you answered “neither,” you’re in good company with the conservatives in Arizona who passed a law last year that allows any of the state’s K-12 students to apply for an Empowerment Scholarship Account.

In so doing, Arizona policymakers put parents in the driver’s seat when it comes to critical decisions about where and how their children are educated.

An Empowerment Scholarship Account is essentially a prepaid bank card that parents can use to pay for their child’s education costs—books, tutoring, private school tuition, and educational therapy, for example.

Upon opting out of the public school system, the family receives 90 percent of the funding that the state would have spent on the student at their district school.

Arizona’s scholarship program began in 2011 for students with special needs. There were 144 participants. Since then, the state Legislature has gradually expanded eligibility to include other students with a need for customized education, including children of active-duty military families, children living on tribal lands, and children assigned to failing schools.

In 2018, the Empowerment Scholarship Account option gave more than 5,000 students control over their schooling.

The bill that Gov. Doug Ducey signed into law last year expanded eligibility further, to include all of Arizona’s K-12 students. However, special-interest groups forced the expansion onto a ballot initiative, which will determine whether the new open-eligibility policy will continue.

When parents control funding, they have leverage. If something about their child’s schooling isn’t working, Empowerment Scholarship Accounts give parents the freedom and the funds to choose options that do work.

Parents can prioritize the activities and programs that are the right fit for their children, rather than hoping that one public school size fits all.

Additionally, one of the great innovations that Arizona pioneered in enacting the Empowerment Scholarship Account option in 2011 was the ability for families to roll over unused account funds from year to year in anticipation of future education expenses, including college costs.

Since parents are best situated to know their child’s needs, they’re also best equipped to serve as quality control.

With an Empowerment Scholarship Account, parents submit expense reports showing that they use those funds only for education costs, including required basic subjects like math, science, and social studies.

Ashlee Greenbank and Elias Hines are just two of the thousands of students who have benefited from Arizona’s Empowerment Scholarship Account option. Six-year-old Addison Enriquez’s mom wants the same for her.

Arizona has been the leader in modernizing the school choice movement through the introduction of these accounts.

It can continue to lead by allowing every child in the state the opportunity to find education options that are the right fit for them, and the effort to create more choices for families—through private school choice options and charter schools—is paying off.

As researcher Matthew Ladner has documented, Arizona is the only state to see statistically significant gains and no declines in science, math, and reading for fourth-graders and eighth-graders (the grades tested on the National Assessment of Educational Progress) from 2009 to 2015.

The good news continued in the most recent tests—the 2018 assessment—on which Arizona students continued to shine. Public and private school choice is likely a major contributing factor to that success.

In the mid-1990s, Arizona’s school system found itself buried in enrollment growth, but severely lagging in student academic achievement. Despite enormous investment, the academic achievement of Arizona students remained locked near the bottom in national comparisons.

For the past several decades, Arizona has increasingly embraced choice and opportunity, and continued a trend of more and more students being in charge of their education destinies each year.

It is paying off for families and taxpayers, and should continue to do so for years to come.