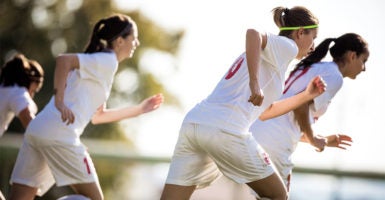 "Allowing transgenders to compete against girls neither maintains the intent or spirit of the [Title IX] law," says state Sen. Jim Stalzer, a sponsor of a South Dakota proposal to use a student’s birth certificate to determine his or her “sexual identity” for the purpose of participating in high school athletics. (Photo: skynesher/Getty Images)

South Dakota lawmakers are considering legislation that would make a student’s birth certificate the determinant of “sexual identity” for participating in high school athletics.

“It’s unfair for girls to [have] to compete against boys,” Qualm, who represents central South Dakota, testified Thursday before the House Health and Human Services Committee.

The bill passed through the committee last week without a recommendation and could come to a floor vote later this session.

Stalzer, a Republican who is a sponsor of the South Dakota bill, said he fears that allowing transgender girls to compete in female athletics is unfair.

“I saw recently that transgenders took first and second in the [Connecticut] girls indoor track championships, setting a new state record in the process,” Stalzer said in an email to The Daily Signal, adding:

I believe we need to either recognize the physical differences in sports or repeal [the federal law known as] Title IX. Title IX was designed to provide opportunities for girls and women to participate in athletics.  Allowing transgenders to compete against girls neither maintains the intent or spirit of the law.

In a press release, Libby Skarin, policy director for the American Civil Liberties Union of South Dakota, spoke out against the bill.

“All young people should have the opportunity to play high school sports and have their personal dignity respected,” Skarin said. “Transgender students are no different.”

Terry Nebelsick, superintendent of Huron School District, told CNN that a student must pass “restrictive” requirements to ensure his or her transgender identity is genuine in order to compete in athletic events without engaging in unfair competition.

These requirements include written statements from students and guardians, and verification from a health care professional.

Debates in the states regarding transgender athletic participation are showing up in national headlines.

Tennis player and 18-time Grand Slam tournament winner Martina Navratilova was criticized by some LGBT activists for writing an op-ed last week in the United Kingdom’s Sunday Times headlined “The Rules on Trans Athletes Reward Cheats and Punish the Innocent.”

“Letting men compete as women simply if they change their name and take hormones is unfair—no matter how those athletes may throw their weight around,” Navratilova wrote.

Navratilova penned the article after she was removed from the advisory board of Athlete Ally, a New York-based group that supports transgender athletes, for saying that transgender women’s participation in sports is a form of “cheating.”

“Martina Navratilova’s recent comments on trans athletes are transphobic, based on a false understanding of science and data, and perpetuate dangerous myths that lead to the ongoing targeting of trans people,” Athlete Ally said in a press release.