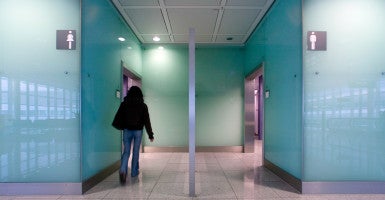 Citing student privacy rights, the South Dakota Senate this week passed a bill that would prohibit students at public elementary and secondary schools from using bathrooms, lockers, and shower rooms that don’t match their biological sex. The bill, however, also requires reasonable accommodation of students who identify as transgender through the provision of alternate facilities if requested.

The Senate passed the bill with a 20-15 vote on Tuesday after the state House of Representatives voted in favor of it on Jan. 27. It now awaits Republican Gov. Dennis Daugaard’s signature to become law.

“South Dakota could become the first state to ban transgender students from using restrooms of the gender they identify with,” CNN reports.

The bill defines biological sex as “the physical condition of being male or female as determined by a person’s chromosomes and anatomy as identified at birth.”

If a student, with the consent of his parent, reports that his gender identity does not conform with his biological sex, a “reasonable accommodation” must be made as long as it does not cause “undue hardship” on a school district.

“A reasonable accommodation may include a single-occupancy restroom, a unisex restroom, or the controlled use of a restroom, locker room, or shower room that is designated for use by faculty,” reads the bill.

“This is a commonsense bill that protects the rights and interests of all students,” said Ryan T. Anderson, the William E. Simon fellow at The Heritage Foundation. “It ensures reasonable accommodations for transgender students while also protecting the privacy rights of other students. Instead of a winner-take-all approach favored by the left, this bill helps create a win-win outcome for everyone.”

American Civil Liberties Union attorney Chase Strangio wrote an open letter to South Dakota lawmakers on Tuesday, arguing that the language of the measure threatens the emotional well-being of students.

“If I were a student in South Dakota right now, chances are I would not survive into adulthood,” Strangio, who identifies as transgender, wrote.

“I urge South Dakotans and people across the country to take seriously what it would be like to be a young transgender person being told you are so freakish that others must be protected from you. Growing up is painful and isolating at times no matter who you are. The last thing we need is the government to take part in the bullying of our vulnerable kids,” Strangio wrote.

State Rep. Fred Deutsch, R-Florence, who sponsored the bill, told The Daily Signal he was “very proud of my legislative colleagues for doing the right thing” in supporting “a very simple bill about protecting the bodily privacy rights of our children.”

The bill includes language to “address the concerns of transgender children,” Deutsch added.

The lede of this article has been corrected to reflect that students who identify as transgender are not required to use the bathroom corresponding to their biological sex.