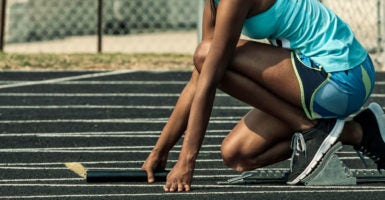 One of their competitors, high school junior Selina Soule, told The Associated Press it was unfair to force female runners to compete against male runners.

“We all know the outcome of the race before it even starts; it’s demoralizing,” said Soule. “I fully support and am happy for these athletes for being true to themselves. They should have the right to express themselves in school, but athletics have always had extra rules to keep the competition fair.”

Miller is the third-fastest runner in the country in the girls’ 55-meter dash. Yearwood is close behind, tied for seventh nationally.

Miller and Yearwood’s success is just the latest instance of male athletes who identify as transgenderexcelling in women’s sports.

Miller and Yearwood easily outpaced female runners in the state in 2018 as well, when both were sophomores.

A sympathetic segment on ABC’s “Good Morning America” in June 2018 described the two runners as “dominating the competition” at the outdoor state championships earlier that month.

In that interview, Miller argued that female runners should work harder, rather than complaining about unfairness, when forced to compete against male athletes who identify as transgender.

Yearwood acknowledged being stronger than female runners to The Associated Press, but compared it to advantages other athletes might have from perfecting their form or doing extra training sessions.

“One high jumper could be taller and have longer legs than another, but the other could have perfect form, and then do better,” Yearwood told The Associated Press. “One sprinter could have parents who spend so much money on personal training for their child, which in turn, would cause that child to run faster.”