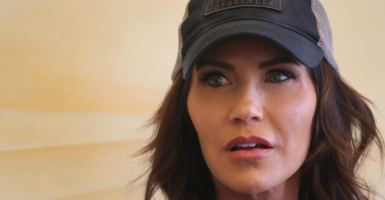 South Dakota Gov. Kristi Noem—seen here on Aug. 9 near Sturgis, S.D.—has redeemed herself in the eyes of some conservatives who had been critical of her for rebuffing legislation earlier this year banning biological males from women’s sports. (Photo: Scott Olson/Getty Images)

Conservatives who criticized South Dakota Gov. Kristi Noem for failing to certify a bill banning biological males from women’s sports are now praising the Republican for her draft “Fairness in Women’s Sports” legislation.

The governor released draft text legislation Tuesday that would codify her executive orders mandating that only biological female athletes can participate on sports teams designated for girls or women.

“This legislation does not have the problematic provisions that were included in last year’s House Bill 1217,” Noem said in a Tuesday statement. “Those flawed provisions would have led to litigation for our state, as well as for the families of young South Dakota athletes—male and female alike.”

The South Dakota governor ignited a conservative firestorm last spring when she failed to certify a bill banning biological males from playing women’s sports. In the face of heavy criticism from conservatives, including Fox News host Tucker Carlson, the governor insisted that H.B. 1217 would subject South Dakota to lawsuits the state could not win.

The Daily Caller News Foundation first reported in March that Noem was wavering in her support for H.B. 1217 due to pressure from special-interest groups in South Dakota, though she previously had said she was “excited” to sign the legislation.

Critics accused the governor of “political theater” and caving to pressure at the time, accusations that Noem and her team vehemently denied.

American Principles Project President Terry Schilling and the group’s director of policy and government affairs, Jon Schweppe, were two of Noem’s most vocal critics in March. But on Tuesday, both Schilling and Schweppe praised Noem’s new legislation.

“We’re pleased that Gov. Noem is finally taking action in South Dakota to adequately protect female athletes,” Schilling said. “Our initial impression of her proposed legislation is that it is a strong measure to defend the integrity of women’s sports from K-12 to college. We encourage state lawmakers to support it and officially make South Dakota the 10th state to enshrine protections for women’s sports into law.”

The American Principles Project president said that it is “unfortunate” that Noem took nine months to “arrive at this point.”

“The reality is that these protections should have been implemented back in March,” he said. “Instead, Noem vetoed the first bill to arrive at her desk, after promising initially to support it, and signed a series of toothless executive orders afterward.”

“Although it’s good to see her correcting her mistake, she missed a golden opportunity to show leadership on this issue. We hope she will learn from this experience and choose to stand up to woke business interests and leftist institutions the next time a similar fight arises. She still has much work to do to gain back conservatives’ trust.”

The Daily Wire’s Michael Knowles quoted Catholic St. John Vianney in response to Noem’s announcement, tweeting, “The saints did not all start well, but they all ended well.”

Jay W. Richards, a senior research fellow at The Heritage Foundation’s DeVos Center for Religion and Civil Society, told The Daily Signal that Noem’s bill is an improvement over the “current situation in many states.”

“But the South Dakota bill defines biological sex as the sex given on the birth certificate at or near birth,” he said. “Until recently, this wouldn’t have been much of a practical problem.”

Richards warned that Noem’s legislation might open the door to two potential problems.

“First, sex is a biological, not merely a legal, category,” he explained. “We trust that medical providers usually designate the correct sex of a child at birth—except in very rare circumstances. But sex does not equal ‘assigned at birth.’ Sex involves chromosomes, organs, and gametes.”

“Second, there is a movement to stop designating the sex of children on birth certificates,” he noted. “If it becomes law, what would South Dakota direct under such circumstances? The state had an opportunity to define sex biologically, but, by my lights, waffled a bit.”

Noem emphasized in a Tuesday statement that the legislation “is about fairness.”

“Every young woman deserves an equal playing field where she can achieve success, but common sense tells us that males have an unfair physical advantage over females in athletic competition,” she said. “It is for those reasons that only girls should be competing in girls sports.”

“Women have fought long and hard for equal athletic opportunities, and South Dakota will defend them, but we have to do it in a smart way,” she added.