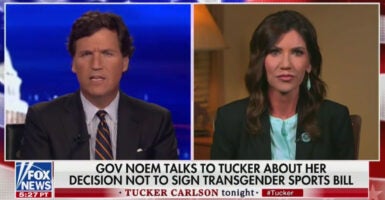 Noem discussed South Dakota House Bill 1217, which would ban biological males from participating in women’s high school sports, with Carlson following her Monday press conference in which she reiterated that she will not sign the bill in its present form and announced the creation of a coalition separate from the bill.

“So you are saying the NCAA threatened you and you don’t think you can win that fight?” Carlson asked Noem. “They said, ‘If you sign this, we won’t allow girls in South Dakota to play,’ and you don’t think you can win in court even though the public overwhelmingly supports you nationally, and so you are caving to the NCAA? I think that’s what you are saying.”

“No,” Noem responded. “That’s not right at all, Tucker. In fact, you are wrong, completely.”

Noem explained that she has been consulting with legal scholars and professors since November asking them how to protect women’s sports, and that these legal experts advised her to create a coalition.

“I’m sick and tired of the NCAA threatening states, challenging us and bullying us,” Noem said. “So we are going to build a coalition of leaders, athletes, and people who want to protect women’s sports and want to make sure that our women keep Title IX in place to protect their right to be competitive and to be rewarded by participating in these team sports and make sure this coalition can fight the NCAA to make sure we are protecting Title IX.”

“But these standards far predate Title IX,” Carlson responded. “And I’m not sure why Title IX is relevant or even really worth defending. This is thousands [of] years of common sense and tradition. Girls play girls sports and boys play boys sports. Why not instead just say, ‘Bring it on, NCAA. I’m a national figure, go ahead and try to exclude us. I will fight you in the court of public opinion and defend principle’? Why not just do that?” Carlson said.

Noem said that she was fighting the NCAA by creating the coalition Monday, to which Carlson told her, “You vetoed the bill.”

“I did not veto the bill,” Noem fired back. “I asked the Legislature to change it so I can win.”

Noem said that she’s not interested in a participation trophy or “picking a fight that we can’t win.”

The Daily Caller News Foundation previously reported that the governor was wavering in her support for the legislation due to pressure from various groups in South Dakota.

Though Noem said as recently as March 8 that she was “excited” to sign the bill, her communications director told The Daily Caller News Foundation Friday morning that the governor was still weighing the bill.