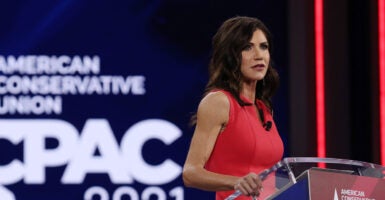 South Dakota Gov. Kristi Noem insists her decision to return HB 1217 to the state House with a failure to certify does not equate to a veto. Pictured: Noem addresses the Conservative Political Action Conference Feb. 27, 2021, in Orlando, Florida. (Photo: Joe Raedle/Getty Images)

The state’s House rejected Noem’s style and form veto of HB 1217 on Monday, the state’s Veto Day, by a vote of 67 to 2. The vote sent the bill back to Noem, who returned the bill to the House the same day with a failure to certify, the Rapid City Journal reported.

Noem’s spokesman Ian Fury disputed March 23 that Noem could have signed the bill, telling The Daily Caller News Foundation that “she had no constitutional authority to do so.”

“The Legislature didn’t approve her ‘specific recommendations’ as provided by the Constitution,” Fury said, referring to South Dakota’s Constitution.

Vote to pass the governor’s style and form veto on the Fairness for Woemn’s Sports bill fails 2-67. The bill now goes back to the governor for her to either sign or veto. House believes her style-and-form is unconstitutional.

The governor, who has come under heavy fire from conservatives in the past few weeks for failing to sign the bill, had previously and repeatedly emphasized that she had not yet vetoed HB 1217. On Monday, she again insisted to lawmakers that her decision to return the bill to the House with a failure to certify did not equate to a veto.

“Returning the bill is not a veto,” she wrote in a Monday letter. “Rather, the constitution provides that the legislature’s failure to accept my recommendations requires that the bill be treated as if it was vetoed.”

The governor also sent a second letter to lawmakers Monday in which she announced two executive orders: one to “protect fairness in K-12 athletics” and another to “do so in college athletics.”

“Since Governor Noem could not constitutionally sign the bill, she took the only action that she legally could take,” Fury told The Daily Caller News Foundation on Tuesday, “issuing executive orders to protect women’s sports at both the K-12 and collegiate levels until the legislature can pass legislation superseding those EO’s.”

In the letter, Noem reiterated her concerns about HB 1217 and noted that though her critics point out that several other states have “taken action on this topic,” the legislation passed in other states is different than South Dakota’s bill.

“I raised four concerns in my proposed style-and-form revisions,” Noem wrote, citing “the performance-enhancing drug ban section, which is not limited to protecting girls sports” and “the cause of action section which would have turned any failure to make a sports team into a litigation hazard.”

Noem also cited “the onerous paperwork requirement, which required every parent of a school-aged child to turn in paperwork every year that identified whether the parent’s child was a boy or a girl and to address whether their child has taken performance enhancing drugs in the last year” as well as “the provision on applying the law at the collegiate level.”

“And when the state Legislature rightly rejected Noem’s changes, 67-2, she was left with a final choice: back up her claim to be a defender of girl athletes by signing the bill or complete her capitulation to the woke NCAA and activist business interests by letting it die,” Schilling said.

Unfortunately, she chose the latter, making her the only Republican governor to date to refuse to sign legislation protecting girls’ sport when given the opportunity. So much for leading a coalition.

Jon Schweppe, the American Principles Project’s director of policy and government affairs, insisted to The Daily Caller News Foundation that the governor has vetoed HB 1217, though she is attempting to make a distinction between a “veto” and a “vetoed bill.”

“She had a chance to sign it into law, twice, and she passed both times,” Schweppe said.

“Voters are smarter than that,” Schweppe said. “The bill now heads back to the House and Senate needing a two-thirds majority in both chambers. We are anticipating a vote within the next hour or two.”

The Daily Caller News Foundation previously reported that the governor was wavering in her support for the legislation due to pressure from various interest groups in South Dakota.

Though Noem said as recently as March 8 that she was “excited” to sign the legislation, her spokesman later told The Daily Caller News Foundation that the governor was still weighing the bill.